Is Poland still a legitimate subscriber to the European project? 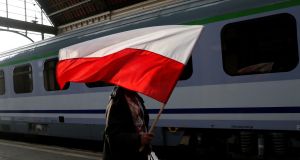 A Polish right-wing activist arrives at Keleti station on Wednesday to join a pro-Orban march. “By pumping up and co-opting Polish national fervour, PiS frames any criticism of its reform agenda as attack on itself as a broadside against national honour.” Photograph: Bernadett Szabo/Reuters

While the rest of Europe has been preoccupied by Brexit, and whether or not the UK will skid uncontrolled out of the European Union, a slow-motion car crash has been taking place in Poland.

The country whose bravery, like no other, contributed to European unity is now racing towards a cliff. At the wheel is Jaroslaw Kaczynski, the head of the ruling Law and Justice (PiS) party. The 68-year-old holds no official office in the Polish government, yet he is engaged in a staggering game of chicken with EU institutions and neighbours. And all because of a reform agenda that has left no stone unturned in Poland since his national conservative party scored an absolute majority in October 2015.

PiS sells its reform agenda as completing Poland’s incomplete transition to democracy in 1989, by sidelining post-communist cronies from positions of power. To secure its mandate, the Kaczynski team stoked, then tapped, widespread frustration at urban elites and an unequal distribution of wealth in the democratic era. PiS delivered on its promise, to do politics for the plain people of Poland, with popular measures such as a 500zloty (€119) monthly children’s allowance. This has been a huge boost for struggling families in the PiS rural heartland and today the party enjoys 44 per cent support, more than six points up on its 2015 election result.

But critics see PiS in the reform agenda a far less noble aim: complete control of every aspect of Polish life by abolishing the separation of powers, checks and balances and the rule of law – the non-negotiables of EU membership.

The public broadcaster TVP has been purged of critical thinkers and turned into a government propaganda outfit, they say. Likewise the civil and diplomatic services. The state prosecutor is now the justice minister. Government politicians dominate bodies that appoint new judges and, to expedite judicial reform, sitting judges have been shown the door with new retirement rules – women judges five years earlier than their male colleagues.

Last December, the European Commission activated sanctions procedures against Poland over judicial reforms that left the independence of the judiciary “completely moot”.

By pumping up and co-opting Polish national fervour, PiS frames any criticism of its reform agenda as attack on itself as a broadside against national honour

Given all that, Justice Aileen Donnelly this week announced she would ask the European Court of Justice (ECJ) the question European politicians have avoided answering for two years: is Poland still a legitimate subscriber to the European project and its underpinning values?

Her High Court decision has electrified Europe’s closely-knit law community. Prof Franz Mayer, a leading German constitutional lawyer, suggests the ECJ will not be enthused at being passed this political hot potato from Dublin.

“But I don’t expect them to duck and cover either,” he said. After all, if doubts over Poland’s legal system suspend European arrest warrants in Dublin, what about the legal basis of Polish contracts in Copenhagen or driving licences in Darmstadt?

“Then everything starts to slide and you could paralyse the single market,” said Prof Mayer.

For two years Warsaw has dismissed the commission’s investigation as impinging on its national sovereignty, confident that Hungary will, as promised, torpedo any eventual unanimous vote for EU sanctions.

But the ECJ is not such an easy opponent. In landmark rulings in the last decade, from abortion to illegal logging, Warsaw has, in the end, always yielded to the ECJ and EU law.

Critics predict even PiS will struggle to sell an ECJ defeat on this matter as victory – and may accept a strategic fallback. But that, they say, will not solve the wider problem.

By pumping up and co-opting Polish national fervour, PiS frames any criticism of its reform agenda as attack on itself as a broadside against national honour.

“PiS defines the EU as the cause of social problems in Poland and portrays itself as the cure, so anyone who criticises the Polish nation it represents is against its cure,” argues Prof Marcin Matczak, of the University of Warsaw’s law faculty. “What we need here is more intelligent communication from Brussels, that it is not the enemy.”

In that sense it may be judicious that this week’s challenge to Poland’s reform agenda has come not from an old enemy like Germany but from Ireland, a well-regarded place thanks to its strong Polish community.

On a personal level, Poland’s prime minister, Mateusz Morawiecki, will struggle to attack this legal challenge from the High Court in Ireland given he once served as Irish honorary consul in Poznan.

The question forced in Dublin: are the PiS judicial reforms not counterproductive if a friendly nation such as Ireland has so little trust in the Polish courts that it refuses to hand over a suspected drug trafficker for trial?

For two years PiS has packed one explosive reform on top of another to fashion a legal-political bomb in Warsaw. This week, 2,000km away in Dublin, Justice Aileen Donnelly lit the fuse.