Irish New Year’s Day traditions: Looking to 2015 in the shadow of the past 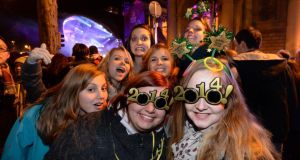 ‘On New Year’s Eve you are supposed to be invited to a party. But lots of people aren’t. For decades, I have spent New Year’s Eve watching television, which celebrates by showing exceptionally terrible programmes followed by images of people singing Auld Lang Syne in Scotland and London.’ Above, celebrations at midnight at the Three NYE, New Year’s Eve Dublin Countdown Concert at College Green, Dublin, last year. Photographer: Dara Mac Dónaill / The Irish Times

Some calendar festivals are exciting. Christmas, Halloween. Mayday or Midsummer. But the new year festival?

You are supposed to be invited to a party. But lots of people aren’t. For decades, I have spent New Year’s Eve watching television, which celebrates by showing exceptionally terrible programmes followed by images of people singing Auld Lang Syne in Scotland and London. Then we sing Auld Lang Syne badly, drink champagne, hug – and go to bed.

It comes as no surprise to find that folk customs related to the new year are considerably fewer and less interesting than those associated with most other festivals. “New Year’s Eve and Day never seem to have been major festivals in Ireland,” Kevin Danaher wrote in The Year in Ireland. Research in the national folklore archive in UCD corroborates his conclusion.

The main thing people did on New Year’s Day was nothing. Pretty much like nowadays.

A Cavan man reported, in 1941: “It was the custom that you could bring nothing out of the house on New Year’s Eve, and spend no money. If anyone came into the house on that day without bringing in something, the house would be empty the whole year round.”

Even everyday flaithiúlacht was discouraged: “On New Year’s Day, some people would give you nothing, afraid they’d be giving their luck away. They wouldn’t give anything out of the house.’

“Well, on New Year’s Eve, you weren’t supposed to take a drop of water from the well after sunset. You took in whatever water you needed for the night before the sun went down. Not only that, you couldn’t throw out any water, dirty or clean! It had to be kept inside till morning.

“It was on this night that Our Saviour transformed the water to wine at the wedding feast at Cana... Everyone believed if they didn’t keep the custom they would suffer at the hands of God.

“A man didn’t accept the practice. He went to the well but he didn’t return. He was found dead in the morning, beside the bucket of water at the edge of the well.”

Today, one of the most common new year practices is the making of resolutions. I will work harder, get thinner, give up my bad habits. We plan optimistically, attempting to control our future by willpower. Curiously, I could find no references to new year resolutions in the folklore archives (which begs the question, when did this practice start?). Like us, the people of the past longed to know what would the year bring. But attention was focused on prognostication rather than planning. Fate – and the weather – would decide. Natural signs were interpreted, often fancifully. If the river was high on New Year’s Day, it was a sign that things would be expensive. If it was low, they would be cheap. A girl might sleep with certain herbs under her pillow, hoping to dream of her future husband.

A custom observed on January 6th, Little Christmas, a day celebrated with much more gusto than New Year’s Day, was to save the withered holly and other decorations to put on the fire on Pancake Tuesday. This emphasises the continuity and connectedness of days and seasons. The traditional holidays pattern our lives, which are less predictable than we would like. Comfortingly, the festivals come round, linking season to season and year to year. They connect the present to the past and the living to the dead.

Once Christmas was over, the major festival in Ireland, pagan and Christian, was St Bridget’s Day. It fetes what mattered most to our ancestors: the coming of spring. The weather improved. The days were getting longer.

“On St Brighid’s Day you can put away the candlestick and half the candle.” Definitely worth celebrating.

Eílís Ní Dhuibhne is a writer, teacher of Creative Writing and folklore scholar. Quotations with kind permission of the director of the National Folklore Commission, University College Dublin

2 Covid-19: 10 things we thought about the virus a year ago – that turned out to be wrong

5 The future of Covid-19 in Ireland: Best-case, worst-case and even-worse-case scenarios