Ireland can’t meet simple climate change targets. How will it meet ambitious ones? 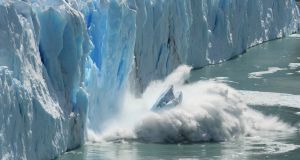 Ireland has committed to an 80 per cent reduction in greenhouse-gas emissions, the main cause of global warming, by 2050. It is a highly ambitious aspiration to, in effect, eliminate carbon dioxide derived from human activity. It requires confronting a complex mix of choices on how we live, produce food, use energy, avail of transport, and construct and heat buildings. The time frame is little longer than that of a mortgage on a house.

If we have any hope of achieving that target we must cut our emissions by 5 per cent a year, compared with 1990 levels, from 2018 to 2050. Yet Ireland is not going to meet easier targets for the period up to 2020, making us one of just two European Union states that will not deliver on shorter-term commitments. We are in fact increasing emissions, notably in transport.

The Paris accord on countering climate change commits to a further tightening of targets, as efforts by all parties to hold the rise in the global average temperature to less than 2 degrees above preindustrial levels, and to try to limit the increase to 1.5 degrees, are falling short.

This is the immensely challenging backdrop against which the Government’s long-overdue national mitigation plan on climate change, finally published on Wednesday, needs to be evaluated. How technology will inevitably help navigate the “fundamental societal transformation” – Taoiseach Leo Varadkar’s summation of the challenge – is not fully clear. And change is more difficult to pursue because there is uncertainty about outcomes in balancing cost factors, economic wellbeing and the need for a better environment.

But the global climate clock ticks more loudly with each passing day, so much so that the question has to be asked if this is a sufficiently robust scheme to ensure we have time to plan for a rapid and just transition to a decarbonised society – and not have drastic solutions foisted on us, such as large carbon costs, and probably fines as disruption caused by climate change itself continues to take a heavier toll on the environment. It is the difference between opportunities after astute readjustments and painful impositions that few will like.

The plan evaluates emissions issues under many headings, but too often there is insufficient detail about how reductions will be achieved

A total of 106 substantive actions across the critical fronts of transport, energy (especially electricity generation), agriculture and land use, and the built environment are outlined, with responsibility attached to individual departments in Government. It evaluates emissions issues under many headings, but too often there is insufficient detail about how reductions will be achieved.

Some demanding commitments are set out – for instance, all new cars and vans sold from 2030 must be zero emission or zero-emission capable, signalling the demise of diesel and petrol cars within probably 10 years.

Full electrification of the car fleet could represent a feasible option for Ireland, it states, where supporting grid infrastructure is developed – yet there is no updating of seven-year-old incentives to accelerate their adoption, as is happening elsewhere.

Farming accounts for about a third of national emissions. The mitigation plan outlines moves to smarter farming and better breeding in beef and dairying. It notes the particular challenges of greenhouse gases while responding to an increased need for food driven by a growing global population and rising affluence. There is a big undertaking to move to carbon-neutral farming, but it doesn’t reconcile those conflicting aspirations.

“Once again, the most egregious ‘free pass’ on emissions has been handed to our agriculture sector,” says Charles Stanley-Smith of An Taisce. Rather than showing a pathway for agriculture to reduce its huge emissions and move towards an environmentally sustainable model of food production that rewards farmers for real ecological stewardship, “we get meaningless wordplay”.

On land use there is a heavy reliance on afforestation and use of forest-based biomass and wood products to counter current emissions from farming. “This offers considerable scope for climate-change mitigation, equivalent to 20-22 per cent of agricultural emissions on an annual basis.”

The potential of bioenergy is recognised, including the use of agriculture residues, such as animal and dairy byproducts, to produce heat, power or both through combustion or anaerobic digestion. But a national policy statement on the bioeconomy has to come first.

Energy efficiency is central to this plan, with a merited, enhanced role for the Sustainable Energy Authority of Ireland. Using less energy and using it more efficiently, reducing fossil-fuel imports, is the most cost-effective and accessible way to tackle climate change. The growing use of renewables in electricity generation shows what can be achieved with ambition and market supports – although we continue to be the only EU state without comprehensive renewable-heat incentives.

Many measures to reduce carbon dioxide in the built environment are achieving results, although this is mainly with new builds rather than through retrofitting old buildings.

Minister for Climate Action Denis Naughten insists the plan is a first step in a “whole of Government” approach to addressing Ireland’s emissions. He is under no illusions that as a country we are playing catch-up on our obligations. “The plan sets out the full range of measures already being undertaken to reduce our emissions, but, crucially, it also provides the framework for further work that must now be undertaken by Government as a whole.”

That puts emphasis on updating ambition and rigorously ensuring delivery – what has been achieved up to now, although not insignificant, is simply not enough. Budget 2018 will tell if the new approach is taking root, especially at the Department of Finance.

In the meantime there are no bold measures to make it easier for everyone to do the right thing, as the Green Party leader, Eamon Ryan, observes. Climate science is now broadly understood, but people don’t know what levers for change they need to pull.

Key actions, he suggests, should have included timelines for the end of coal and peat use in power generation; how solar power and offshore wind opportunities are to be realised; a move to replace oil-fired central heating with zero-carbon alternatives; and opening up the electricity grid to allow farms, businesses and communities to add solar power to it.

Such tangible measures would ensure that the Government’s commitments add up to an action plan with less “action promise”, according to Oisín Coghlan of Friends of the Earth. It’s hard to disagree with his verdict that the document is honest about the scale of the challenge that Ireland faces, and about our lack of progress so far, but simply doesn’t commit to enough new actions to reduce emissions decisively.