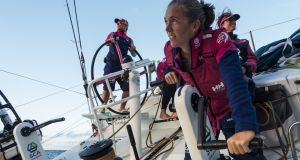 Libby Greenhalgh: a veteran of Olympic sailing teams, she is also familiar with Irish waters

Biting, cutting, piercing, following – there are as many adjectives as there are English words for wind. The Foclóir Seoltóireachta has 40 Irish phrases for “gaoth”, while Icelandic terms for gales and storms match Inuit ways for describing snow.

Libby Greenhalgh knows her wind shifts from her wind shadows, her polar easterlies from her doldrums. Not even 40 years old, the British meteorologist has eaten, slept (or tried to) in all five major wind zones as a seasoned round-world sailor.

A veteran of Olympic sailing teams, Greenhalgh is also familiar with these waters, as in Dublin Bay and Cork harbour and the Round Ireland yacht race. Some years ago she turned professional, swapping the comfort of the British Met Office for wet and windswept decks.

As a navigator, she spends much time down below – where sea sickness is an added hazard.

She has competed in two Volvo round world events, and was on board the 2017-18 race entry Sun Hung Kai/Scallywag when British crewman John Fisher was knocked overboard in the Southern Ocean on March 26th last.

Within seconds, Greenhalgh had locked the yacht’s positon about 1,400 miles west of Cape Horn into her navigation software. The crew knew this leg between Antarctica and Brazil to be the most unforgiving, with rapidly changing depressions and wind speeds of 30 knots and more.

Fisher was wearing a survival suit, but had unclipped his tether to deck moments before the mainsheet system caught him. Some 10 hours later, with conditions set to worsen, the crew had to make the heartwrenching decision to abandon the search.

It was a traumatic experience. Fisher was the sixth recorded fatality in the history of the Whitbread/Volvo round world race, while three have died in the Clipper circumnavigation.

Offshore racing, such as the Fastnet and Sydney-Hobart, has claimed more lives, and continues to do so in spite of revolutionary changes in communication and satellite safety systems.

Still, Greenhalgh is keen to compete in another Volvo race, and is part of the Magenta project, which is encouraging more women into that high-end sector of the sport. She is well aware of dinghy sailor Annalise Murphy’s Olympic achievements, and knows and admires Mayo woman Joan Mulloy, who is preparing to become the first Irish woman to compete in the Vendée Globe solo round the world race. However, Greenhalgh doesn’t have the tiniest desire to do what Mulloy is doing.

“Solo sailors ? I think they are insane,” she laughs. “You spend 70 per cent of your time down below on your own, with no one to talk about what you are going through, and then when there is any public interest it is all about the dramas. The shared experiences on a crew create bonds – one person might be having a bad day and you pick them up. It’s like life, really – not what you do but how you do it.”

Greenhalgh will talk about this and more at an event organised by the Small Craft Group of the Royal Institute of Navigation (RIN) and the Irish Meteorological Society at the Royal Irish Yacht Club in Dún Laoghaire, Co Dublin, on November 23rd. She is one of three weatherwomen secured by organiser Darryl Hughes to speak about the impact of the elements on sailing.

Greenhalgh has no doubts about climate change, but takes a meteorologist’s view on extreme weather: “Yes, the number of hurricanes and typhoons suggests storms are becoming more severe, but we may have had extreme events before records began ...”

With Greenhalgh will be Met Éireann head of forecasting Evelyn Cusack, Jessica Sweeney from the Australian Bureau of Meteorology and chief meteorologist for the Ben Ainslie America’s Cup Challenge Team, and Conor Fogarty, who has completed over 30 transatlantic crossings and two circumnavigations.