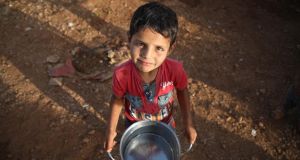 A Syrian boy in a camp for internally displaced people near Kah, in Idlib province. Photograph: Aaref Watad/AFP/Getty Images

What threatens to unfold in Idlib in northern Syria in the coming weeks and months is unfathomable. In the last month alone, intensifying hostilities have resulted in the deaths of up to 300 people, including 40 children.

But the impact of the fresh round of bombardment on the lives of families caught in this devastating war for nine years is for the most part missing from our television screens and newspapers.

The end of the holy month of Ramadan, Eid, normally a time of great celebration when families and communities come together, has brought no respite in the fighting. This year the holiday has been marked by renewed terror and daily massacre for the already stricken population. Thousands have celebrated Eid separated from their loved one and away from their homes. The daily horror they face is unimaginable.

No mercy has been shown the civilian population. In May, 24 medical facilities and 25 educational facilities were struck directly with air strikes by the Syrian government and its allies Russia and Iran. Furthermore, incendiary bombs are being deployed to burn tillage crops, just as they are ripe for harvest, and unconfirmed reports have emerged regarding the use of chemical weapons.

First-hand accounts describe families who have already been displaced multiple times during the conflict, forced to flee yet again with only the clothes on their back.

They are in urgent need of healthcare, shelter, mattresses and blankets, as well as food and also cash. While food and other items are still available in the local markets, most of the recently displaced families cannot afford to buy what they need in the markets and are dependent on emergency assistance.

Idlib province is now poised for the final, and darkest, chapter of this unprecedentedly barbaric war. This region, roughly the size of Co Galway, is controlled by the Free Syrian Army and other remnants of the forces that tried to topple government of President Bashar al-Assad in 2011.

It is the last refuge for more than three million people, many already displaced from all over the country as the Syrian government consolidated its control of, in particular, the populous southwest region, which encompasses Damascus, Homs and Hama. The east of Syria is controlled by a coalition of Kurdish and Arab militias.

The Turkish border with Idlib is closed and will remain so, Turkey having already absorbed more than 3½ million Syrian refugees to date. The internally displaced persons’ (IDP) camps on the Turkish border are oversubscribed, as are the informal camps which have sprung up as a result of the overcapacity. Recently displaced people are in desperate need, living hand to mouth, in many cases with little more than a sheet of tarpaulin lashed to olive trees as shelter.

There is no indication as to what the future holds for these people.

In September last year, conscious of the barbarity of the Eastern Ghouta offensive launched in February 2018 by the Syrian army – nearly 2,000 people were killed as government forces took control of the rebel enclave near the capital Damascus – and the likely humanitarian consequences such an offensive on Idlib would pose, the Turkish government sought a rapprochement with Russia to avoid such an eventuality.

A tentative ceasefire was agreed which saw a demilitarised zone (DMZ) established around Idlib province with the obligation for the removal of heavy weapons from the front. Nonetheless, hostilities continued, albeit at a reduced rate, with the sporadic shelling of towns along the DMZ.

The beginning of May, however, saw this accord fully unravel and the familiar double-act of barrel bombs and air strikes are again being utilised, this time on the helpless residents of the towns south of Idlib city, well inside the DMZ.

In all, an estimated 300,000 people from the towns around the DMZ and the southern part of Idlib governate have been driven ever further north in the last month.

The major concern is the fate of the millions of innocent civilians who will be squeezed into a tightening, inescapable pocket abutting the Turkish border. Imagine the population of Ireland in an IDP camp indefinitely? That is the scale of the crisis facing Idlib and, by extension humanitarian agencies and partners on the ground.

As every day threatens a a new massacre the main focus of the international community must be meeting humanitarian needs and protecting people from this escalating violence.

Siobhán Walsh is the chief executive officer of Goal, which has been working in Syria since 2012