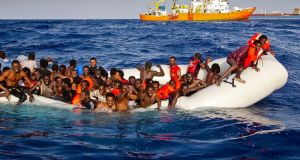 We, as Irish people, given what we suffered on decrepit ships in the past, should support a Humanitarian Assistance Zone. Photograph: Patrick Bar/SOS Mediterranee via AP

Last week’s report of a mass drowning of refugees in the Mediterranean is an indication of what is to come as the weather improves.

Merchant ships as well as coastguard and naval vessels – including our own – are going to be under immense pressure in the coming weeks to prevent further tragedies.

It is now critical that we create the legal framework to deal with the problem.

Throwing up to €6 billion of EU money – £500 million (€642 million) of which will reportedly come from Britain – at Turkey to try to leave the problem at their door is not going to be enough. But it also proves that money is available.

As long as people continue to flee from wars raging in the Middle East and Africa, they will keep trying to reach Europe. But it doesn’t have to be this way.

A mechanism exists to put in place a Humanitarian Assistance Zone on the north African coast, through the Inter-Agency Standing Committee of the United Nations. Under UN resolution 46/182 it would be possible to process refugees and migrants in a humane and fair way.

It would involve using the many ferries and hospital ships that are currently laid up around the globe.

Processing refugees and migrants in a Humanitarian Assistance Zone on the north African coast is far preferable to them arriving on Europe’s shores in a dysfunctional mess by land and sea.

The International Chamber of Shipping, whose member vessels last year were under enormous pressure to rescue migrants in accordance with their duty under international conventions, have argued that the UN needs to create the Humanitarian Assistance Zone.

It would establish the jurisdiction to allow the European “state” to control the north African coast, in areas such as Libya and Egypt – but perhaps as far as Tunisia, Algeria and Morocco – and bring the Arab countries to the table.

It is no good waiting outside the jurisdiction with naval and coastguard vessels 12 miles offshore. (Permission is required to enter another country’s 12-mile limit).

The zone needs to be activated immediately by the UN’s Inter-Agency Standing Committee and it is our duty under humanitarian law to do so.

There is another reason to mobilise support for this practical solution right away, and it concerns Britain’s referendum on EU membership which is now a mere two months away.

Britain seems increasingly paralysed by uncertainty and prime minister David Cameron is unable to exercise leadership where this crisis is concerned because of its link to the issue of European migration for economic reasons.

Europe’s dysfunctional response, and the mass drownings in the Mediterranean compounded by ongoing fears of further Islamic State attacks, are all concerns that will weigh heavily on British minds on June 23rd.

But even if Britain leaves the EU, it will still have to deal with the matter: it is an international refugee issue under UN humanitarian law.

Many British voters may not differentiate between an international humanitarian crisis and European migration and they may vote Leave based on a popular misunderstanding.

Ireland has a role to play in both the migrant crisis and Britain’s referendum and we need to exercise our influence to a maximum, both as a country and as individuals.

We will be defined by the path we choose.

Michael Kingston is an Irish lawyer based in London. He is working in a voluntary capacity with the International Chamber of Shipping on the implementation of a Humanitarian Assistance Zone in the Mediterranean

1 Admission of mistake in Oxford vaccine dose raises doubts over reliability
2 Michael J Fox: ‘In the wheelchair, I’m luggage. No one listens to luggage’
3 Saoirse Ronan and Daniel Day-Lewis on ‘greatest 21st-century actors’ list
4 Helen McEntee holds up well for someone with barely a leg to stand on
5 The Crown’s Josh O’Connor: ‘I’m a republican. I’m not interested in the royal family’
Real news has value SUBSCRIBE