How we will rebuild trust in Irish banking 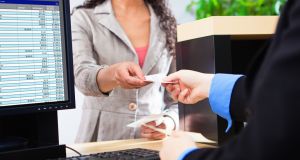 The five Irish retail banks commissioned an independent survey of their more than 25,000 staff.

Trust in the Irish banking system is at an all-time low. This is an unsustainable situation which damages not only the banking sector but the general public interest. To address this problem, banking culture in Ireland needs to change.

For that change to be authentic and sustainable, it must come from within. If regulation were enough, the necessary change would have come about before now. That is why today we are launching an independent body with a dedicated focus on culture.

The Irish Banking Culture Board (IBCB) will advocate for cultural reform in banking and will drive positive change in how the nation’s banks engage with their customers.

Its role will be to facilitate the banking sector to embed a culture where ethical conduct is inevitable and where there are fair customer outcomes, particularly for those in stress or difficulty.

The process leading to today’s launch has been considered, detailed and independent.

The five Irish retail banks – Allied Irish Banks, Bank of Ireland, KBC Bank Ireland, Permanent TSB and Ulster Bank – accept that cultural change is required and decided to fund the establishment of an independent IBCB. They commissioned the public and stakeholder consultation report published today which is hard-hitting in its contents and cathartic in tone, and can, I believe, act as a watershed as we look to the future.

The five banks also commissioned an independent survey of their more than 25,000 staff, the results of which are also published today. I commend them for being prepared to hold a mirror up to themselves and to be prepared to act on what it reflects.

Following an independent selection process, I was selected as chair. I am both honoured and greatly challenged by having been chosen for this vital role. I will announce at our launch this morning the names of the members of the board I have chosen over recent months.

It will comprise of five senior bankers including a chief executive. It will include seven non-banking members drawn from a cross-section of banking stakeholders identified during our public consultation. The board will be completed by the acting chief executive and the chair.

The public and stakeholder consultation process was extensive. It involved interviews with 51 separate stakeholders and online feedback from 747 members of the public. What was said reflected a great degree of hurt and frustration. However, together with a healthy level of scepticism, there were high levels of positivity. Eighty-five per cent of the public expressed clear support for the IBCB’s establishment.

The themes that have emerged include issues around ethical behaviour, customer respect, financial literacy, the importance of human contact and the composition of the board of the IBCB. The findings of the survey of banking staff indicate that more work is required to create an environment where staff feel comfortable raising concerns, where concerns are listened to and where staff’s sense of wellbeing is a key focus. The issues that have been identified in the consultation and survey will set the priorities for the IBCB.

The board of the IBCB represents many strands of Irish society and is composed of people who I believe have the requisite skills, experience and commitment to make a real and lasting contribution to changing the culture of our banks. I am greatly looking forward to working with them in finalising our programme of work following today’s launch.

I expect that we will meet with many challenges in our work. Notwithstanding the high levels of positivity around the initiative, many people will reserve judgment. This is understandable.

The leaders of the founding banks have expressed to me in the strongest and clearest terms an openness and a willingness to change. The challenge is to match that willingness with action, the kind of action that can make a real difference in people’s lives.

We shall pursue concrete, identifiable and institutional change to ensure that our goals are achieved and maintained. It is to this that the banks have committed. I salute that commitment and I will hold them to account. These goals will not be achieved in the short term.

This is a long-term endeavour requiring patience and persistence. I am confident, however, that in the long run we will be able to achieve our ambitious aims. Ethical conduct in banking is an ideal whose day has come. Around the world, from the UK and the Netherlands to Hong Kong and Australia, concrete action is being taken to pursue this ideal. It is time for Ireland to join this global movement towards a better brand of banking.

John Hedigan is a former judge of the European Court of Human Rights, the High Court and the Court of Appeal. He was appointed as chairman of the IBCB in January