How a seven-day week approach can transform hospitals 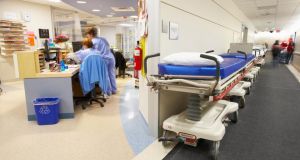 ‘Failure to address these problems places patients at grave risk. If a person has a heart attack or stroke at a weekend, the chance of dying increases by 5 per cent. Boarding in the ED for more than 24 hours almost triples a patient’s chance of an adverse outcome.’ Photograph: Getty Images

Emergency department (ED) and hospital crowding have been around in many countries for at least 30 years. It was initially attributed to the inappropriate use of EDs for trivial complaints. But this is now known definitely not to be the case. In fact the causes are a growing elderly population, advances in life-saving and life-sustaining treatments and a dramatic increase in the degree of illness of the average hospitalised patient.

The volume of ED visits and admissions has soared during this time period in all industrialised countries, including Ireland. All this leads to the obvious conclusion that the number of patients and their needs have exceeded the ability of hospitals to respond. We think this is true, primarily because of the way hospitals are currently operated.

Yet a number of changes could dramatically reduce crowding. To understand this, consider what we know about the hospital environment.

In the past, many admissions to the hospital were elective, and technology and options for treatment were limited. As such, it made sense to run a hospital nine to five, five days a week, with a skeleton crew on evenings, nights, and weekends. In the 1960s, the average hospital stay in the US was 10 or more days, compared to four to five days now. The system was, in large part, meeting the needs of the patient.

Then, the nature of admissions changed from low to high degree of illness, with a growing proportion of acutely ill patients, who arrive at any time, seven days a week. However, hospitals continue to run as a nine to five weekday industry, organised primarily to deliver care to their elective patients. Even so, too many elective scheduled patients enter at the beginning of the week rather than being spread out over the week and too few patients are discharged on weekends. Bringing in too many patients at once and not discharging patients when they are clinically ready jams up the system. The result is periodic boarding of admitted patients in the emergency department, cared for by staff whose attention should instead be directed to the next emergency.

Failure to address these problems places patients at grave risk. If a person has a heart attack or stroke at a weekend, the chance of dying increases by 5 per cent. Boarding in the ED for more than 24 hours almost triples a patient’s chance of an adverse outcome. Entering the hospital during times of overcrowding is associated with a 20-30 per cent relative increased chance of death in the next 30 days.

What could smoothing accomplish? A real life example would be a 600-bed hospital running at full capacity, often over capacity, with an average of 115 admissions occurring on a Monday, and 88 admissions on a Friday. If this was smoothed across a five-day week, this institution would need 560 beds to provide the same service with less boarding in the ED and crowding. Should they make the dramatic leap to a seven-day-a-week institution, they would need approximately 500 beds to provide the same service. Should they also improve discharge time and weekend discharges, these results would be even more dramatic. To achieve this, one would need to work closely with all healthcare providers to adjust working patterns. Only when one has redesigned healthcare delivery can one reliably assess whether more beds are needed.

We are well aware that there are still many problems left on the table, such as the growing number of patients who need placement in nursing homes or rehab centres, which would also be positively impacted by having an even number of daily discharges. The solutions discussed here have demonstrated the potential for a large and possibly definitive impact on crowding, and would create a safer environment for our patients, as well as being better for the staff, and hospital margins. Most importantly, when you arrive with your life-threatening emergency, the ED will be ready to give you the attention you need. These solutions do not require money, staff, or beds. They simply require the change in the way we organise health care delivery.

Peter Viccellio, MD is vice-chairman, Department of Emergency Medicine and associate chief medical officer at Stony Brook University Hospital; Eugene Litvak PhD is CEO of the Institute for Healthcare Optimization and an Adjunct Professor at the Harvard School of Public Health.

4 How to clean your bed: ‘If you didn’t wash it for a year it would be 1kg heavier from dead skin’

5 Harry and Meghan strike at legitimacy of the British monarchy