Home ownership still remains far out of reach for a generation 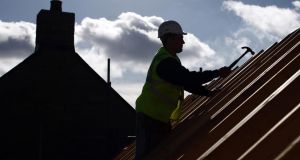 The recent proposal by the Government to build 35,000 homes for rent over the next five years represents a good start to addressing the unacceptable situation regarding housing supply. File photograph: Jason Alden/Bloomberg

A home, however modest, is one of the most fundamental needs of every human being. Yet considerable numbers of individuals and families in Ireland do not have access to this basic need. Almost 90,000 households were in “housing need” in 2013 – an increase of 60,000 since 1993.

In 1975, local authorities provided almost 8,800 “non-market” homes for rent, representing one-third of total housing provision. By 2014, non-market provision represented only 515 homes, or a mere 5 per cent of the total, while market provision had increased to 95 per cent. Access to a home, to buy or rent, depends almost entirely on ability to pay.

The recent proposal by the Government to build 35,000 homes for rent over the next five years represents a good start to redress this unacceptable situation.

Housing provided by private landlords is expensive, insecure and often sub-standard. Good accommodation can be secured by those on high incomes and there are many decent, responsible landlords. However, much accommodation is in breach of health and safety regulations with virtually no security of tenure.

Over €5.5 billion in rent supplement has been paid to private landlords over the last 15 years to accommodate low-income tenants. Yet many individuals and families, unable to pay large rent increases, are being evicted.

Many families, encouraged and facilitated by banks and building societies, unwisely took out excessive loans during the “boom”. They are now in mortgage arrears and in danger of repossession.

Despite the crash, even those in relatively well-paid employment again struggle to purchase homes. The ratio of new house prices to average earnings for the country as a whole is now 7:1 compared to about half that in 1994. In Dublin the average house price is more than nine times average earnings. During the last year house prices in Dublin rose by 22 per cent, apartments by almost 30 per cent.

Thirty years ago a mortgage could be obtained and a home purchased with one modest salary; today that is a rare.

Some commentators decry the fact that prices have fallen since their peak in 2007. They fail to admit house prices have been consistently out of line with other price indicators such as the Consumer Price Index (CPI), average earnings and the cost of construction (see graph).

Since 1995, national house prices increased more than four times faster than the CPI (216 per cent and 52 per cent respectively). Homes are still significantly overvalued, or more accurately, overpriced. A high proportion of disposable income is therefore tied up repaying mortgage debt for an extended period and less disposable income is available for expenditure on other social and economic activities. The result is a deep intergenerational inequality, in that young adults can never aspire to purchase or rent even in relatively modest areas where they were born and raised.

The primary objective of housing is to provide homes appropriate to need at an affordable price or rent. Homes, like health and education, should be provided for all as a right, irrespective of ability to pay. The right is long-established in international covenants which Ireland has signed and ratified. Are we and our political leaders prepared to change our approach to housing? If not, we will continue to have the same housing crises in the years ahead.

Public housing should be rechristened “community housing” and be available in the first instance to poorer families, but also to a broader range of income groups in a position to pay an economic but regulated rent. Operated along the lines of a cost-rental model, this new tenure could become financially viable and compete with the private market.

The policy of relying on private landlords to provide accommodation for vulnerable groups, at a high cost to the exchequer, has been unwise and should be abandoned. To ensure rent certainty for both landlords and other tenants, rent regulation (where rents increase in line with inflation and allow for improvements) should be introduced.

While increasing supply would also dampen down prices, managing demand (as the Central Bank has done) is critical to ensure exorbitant prices are not demanded and paid.

Finally, the housing crisis is most obvious in the Dublin area. A comprehensive urban, regional and rural development policy to spread employment and economic activity more evenly is essential. This would take the pressure off demand for housing and much more off the Dublin area, and would make better use of the many boom-time vacant homes throughout the country. Housing is still out of reach for many and the inequalities persist. It should not and need not be so.