Hold the phone – An Irishman’s Diary on information overload 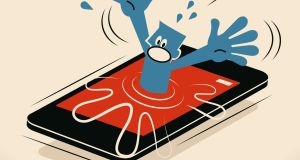 “I read that during the lockdown many people working from home were demented with their mobiles and emails going non-stop.”

The receptionist in the Derry hotel shouted across the foyer to my colleague who worked for another newspaper. “Phone call for you . . . It’s from your head office in Dublin,” she said.

“Tell them I’m not here,” he roared back, winking at me.

It was the early 1970s and the Troubles in the North were the main story of the time. News editors were constantly bombarding their reporters with instructions. Reporters were wary and stressed out, especially when the phone rang. You knew it wasn’t going to be a sociable call. It most definitely was going to be a command to do something difficult, or sometimes even impossible, depending on the imagination of the news editor sitting at a comfortable desk back in Dublin.

My colleague, who certainly wasn’t the James Bond of the journalistic world and liked to live life at his own easy pace, turned to me and muttered the immortal words: “Jesus, I hope they never invent a mobile phone.”

Fair play to him, he had foresight. A really bright guy. He was in fact a bit of a prophet, as it turned out. We never imagined there would come a time when every human – young or old – would be walking the planet with an actual mobile phone glued to his or her ear.

The landline was the only game in town back then. No such things as a mobile phone, laptop, email, Zoom, Skype or any kind of sophisticated technology. I can remember spending hours in telephone kiosks dictating speeches from Stormont to a copy typist in Dublin or describing a protest march that erupted in violence. I can still see the angry red faces outside the kiosks, some banging on the glass, threatening all kinds of murder if I did not move my ass out of there.

I remember one of the most important things a reporter had to do back in those days was to make sure you had a heavy pocketful of small change in your pocket to feed the coin meter. You also had to pray that there was no bent coin blocking the entry point. And you had to pray that the bloody phone wasn’t vandalised. Too often I found the cable cut and my lifeline to the office lying on the ground. A sad sight indeed. Your heart would sink and you would utter a volley of four-letter words as you surveyed the disaster. After all, you had spent half an hour looking for the phone kiosk in the first place, so finding it vandalised was a bitter pill to swallow.

A man in the Department of Posts and Telegraphs told me they spent a small fortune every year repairing kiosks. It was a sore point with them. It was also a hobby horse with me. In fact, even though I’m now retired, I still wake up in the middle of the night in a cold sweat thinking I can’t get a story into the office. It doesn’t matter how brilliant your story may be – however exclusive – if you can’t get it into the paper before the deadline you are dead in the water.

Funnily enough, years later, my man in the department proudly told me they had designed a vandal-proof kiosk, which they were pleased with. Then he caught himself on and shouted, “Don’t print that they are vandal-proof. We don’t want to give the bastards a challenge.” I said okay, as it was in both our interests that the phones remained workable.

While my generation would look on the mobile phone as a magical invention, something to be treasured (carrying a telephone kiosk around in your pocket, wow), I can understand that in modern times there is a downside to this new-fangled thing. Apparently, it is goodbye to freedom. You can be contacted instantly whether you are at the beach or in the toilet. My old colleague cannot say, “ I’m not here.” You most certainly are there and your bosses and people you are not too keen to talk to, know this and would like to ascertain why you aren’t answering.

A couple of years ago a French man took an action against his employers for failing to respect his right to “disconnect” from his phone and email outside office hours. He was successful. The judge agreed with him and he trousered a tidy €60,000 in compensation for his trouble. The French, being a very intelligent, laid-back nation had passed a law in 2017 prohibiting employers from expecting workers to always be available by phone or email, regardless of their working hours.

I read during the lockdown that many people working from home were demented with their mobiles and emails going non-stop. Highly distressing, no doubt.

Reasonable contact from head office is fine, but some bosses get carried away and put too much pressure on already harassed staff. Trying to work from a bedroom with the kids running around downstairs, the eldest with his music going full blast, the wife trying to make the dinner and the neighbour ringing the doorbell, looking to borrow sugar, is not exactly ideal or conducive for completing some vital office project.

Okay, I know that if you have a spare €25,000 in your wallet you can have an instant office erected in your back garden (good quality, fully guaranteed). I see the adverts every day. But it would be hard to get that little item approved on your expenses docket.

Some of our trade unions are pressing to have legislation brought in – similar to that enjoyed by the French – to give some relief and privacy to the workers. We will wait and see how that pans out. But don’t hold your breath.

A 10 per cent lockdown pay cut?
Lockdown: whose failure?
Welcome to retail La-La-Land
Garda checkpoints
Influencers, your country needs you
Putting the pen back in the pension
Staying the course with golf
Proof of the pudding
Revealing mother and baby home records
Accommodating breastfeeding at work