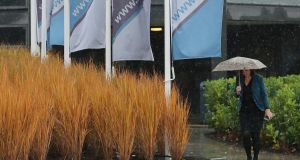 RTÉ workers leaving a meeting with management at the company’s HQ in Dublin 4 as the broadcaster announced it will cut some 200 jobs next year as part of its plan to reduce projected costs by €60 million over three years. Photograph: Niall Carson/PA Wire

Today, Ireland will say a final farewell to the man who represented all that is good and important about public service broadcasting. Gay Byrne dedicated his life to serving his audience, to giving voice to their stories, to pushing boundaries as Ireland matured as a country socially and economically, to showcasing Ireland’s brightest talent, and to holding figures of authority to account.

Public-service media provision is the way in which a nation comes to understand itself socially, culturally and economically. It is the conduit through which the nation constructs its image of itself for the rest of the world. RTÉ has been central since its inception to the creation of Ireland in the global public imagination and as vital creative hub in the life of this nation.

Gay Byrne understood that his RTÉ, his Ireland, were always places of hope. Notwithstanding our current challenges, it is that hope and vision for public-service media that defines the Transformation Strategy that RTÉ has launched this week.

The plan for change outlined shows an organisation tackling reform head on, and making the difficult changes demanded of us. It also sets out our vision for what we can become, what we know our audience wants us to be. Radical change is unavoidable – not a matter of choice. But RTÉ cannot drive lasting change on its own.

The challenge faced by RTÉ is the Irish manifestation of a global wave of digital disruption that is remaking the media industry.

Working together, the RTÉ executive and the board have continually addressed these shifts in audience behaviour, be it through content development, introduction of new platforms or, most recently, achieving efficiencies through the selling of land and resources to accumulate much-needed funding for capital investment.

But there are two specific challenging factors in relation to RTÉ’s plans for change .

The first is the nature of the industry itself. Media is evolving at an unprecedented and relentless rate.

The writer and commentator on media Douglas Rushkoff captures this moment when he refers to the constant “acceleration of the acceleration”. This is a problem for all media companies worldwide, especially publicly funded ones who are working to compete with the global content creation giants whose dominance continues to grow.

The second factor is government, the role of which is fundamental.

I am mindful of the ongoing day-to-day demands on government and, as chair, my dealings with government have been cordial and open. However, the fact is that to date nothing of any major consequence in relation to the key issue of funding for RTÉ has followed as a result of this engagement.

The strategy announced this week is not the first one we have created to address our issues. It’s not just RTÉ saying that our funding model is broken; the Broadcasting Authority of Ireland (which has a specific statutory function), New Era and the Joint Oireachtas Committee on Communications have all made the case for substantial support of RTÉ if the national broadcaster is to continue to fulfil its role as an independent provider of information and debate about all that is culturally, socially and economically important in Ireland – and indeed globally.

Our TV licence system is broken, and has been for many years. It has one of the highest evasion rates in Europe, and as a result the system loses €25 million in public funding every year. This challenge is not unique to Ireland, but other countries have reformed their licence fee systems, including Italy, Denmark, Norway, Germany and Switzerland. There is no good reason for Ireland to be an outlier.

There is a potential opportunity gain for Ireland too. RTÉ and government could become the locus for a collaborative partnership taking in the broadcaster, independent broadcasters, academics and creative industry companies to produce a creative cluster that would form the grounding for a new definition of public service media, a definition capable of driving real economic, social and cultural progress – and aligned with existing government ambition to make Ireland a global leader in content creation.

A reformed, long-term and viable funding commitment by government will allow RTÉ to become the model for 21st-century broadcasting in Ireland and beyond

A version of this model already exists in the UK context where the UK industrial strategy provides funding to a creative clusters programme in which the BBC plays a central role. Ireland could become the benchmark for public service media if it was to take this model to the next level and build in real financial investment in the public service media.

RTÉ is accepting its responsibility in this strategy, making extremely difficult decisions about staff numbers, resources, structures and programming. The broadcaster will drive the transformation and implement the reform necessary, but this change cannot prosper in a decision-making vacuum at government level. Ultimately there is a responsibility on government also. A reformed, long-term and viable funding commitment by government will allow RTÉ to become the model for 21st-century broadcasting in Ireland and beyond.

In a world where essential truths are being corrupted daily by fake news and the deliberate construction of disinformation, public service media becomes ever more crucial. With enduring reform and a stable funding model, we can ensure that RTÉ as a public service broadcaster can continue to offer clarity and insight in increasingly dysfunctional times.

Moya Doherty is chair of the RTÉ board