Redmond’s position was similar to that articulated recently by Gerry Adams on the difficulties Brexit causes in Northern Ireland. 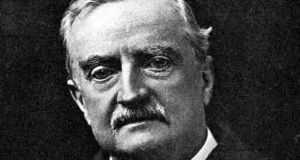 John Redmond, like Adams looked for “interim and transitional” arrangements leading to a united Ireland.

Politics goes in circles. One hundred years ago this summer John Redmond, Edward Carson and their colleagues played out the final denouement in the Home Rule crisis.

Following the Easter Rising and a subsequent Irish visit from Herbert Asquith, David Lloyd George was asked to attempt once more a settlement of the Irish problem. He made considerable progress and reached an outline agreement with both nationalists and the Ulster unionists.

The agreement was reached by virtue of a fudge around whether the exclusion of six Ulster counties from the Home Rule Parliament was to be temporary or permanent.

Clearly depending on whom he spoke to, Lloyd George’s emphasis changed, though his commitment about the endurance of partition had been afforded in writing to Carson. However, the draft Headings of Settlement leave it an open question.

Nonetheless, both parties, Ulster unionist and nationalist, fought hard for the deal.

Carson, fighting with unionists about the immediate establishment of Home Rule in the aftermath of the Rising and the ceding of three Ulster counties, and the Redmondites – faced with stiff opposition from the Healyites – had to sell temporary partition to unenthusiastic Northern nationalists.

The scheme was ultimately brought down by English Tories, now in government, at the behest of southern unionists. In the literature Lloyd George’s ambiguous approach is often held responsible.

Constructive ambiguity was not the plan’s weakness, it was what made it possible at all.

The calculation on the nationalist side seems clear enough. Establish the Home Rule Parliament and see what happens. It was to be the game changer Redmond so badly needed given the decline in his standing since the war began – further undermined by the British response to the Rising. For the Irish Party this was the last throw of the dice. The best way to persuade unionism was to show it the Home Rule Parliament in action.

But for all his burgeoning unpopularity Redmond was a genuine 32-county man. His unpopular positions during the war were taken on two bases: the need to keep the British sweet to deliver on Home Rule and his view that, in the long term, fighting together would bring a divided Ireland, nationalist and unionist, closer together.

So come forward 100 years and compare Redmond’s position with that articulated recently by Gerry Adams on the difficulties Brexit causes in Northern Ireland.

While Sinn Féin, he said, remained committed to the Republic and a unitary state he was open to looking at other arrangements in an “interim and transitional” fashion.

This year we commemorate the Easter Rising as a stepping stone on the road to the establishment of the Irish State. That is right and proper.

But the Rising effectively marked the beginning of the end of a search for an all-island solution. As the Irish position became more committed to advanced separation from Britain, the possibilities of any arrangement with Ulster diminished. The Lloyd George initiative of 1916 was possibly the closest we got to an arrangement that might have kept all those balls in the air.

Adams will not like the comparison with Redmond, and it should not be overstated, but there are similarities. The position he adopts is arguably more advanced than that of the New Ireland Forum, the last time these issues were discussed by nationalism.

The difficulty is that while Redmond was open to a more positive association with Britain, Adams is not. Nor is he alone in that. Redmond, like Parnell before him, had underestimated the attachment of unionism to its British identity. But it is well established now. The challenge, post-Good Friday agreement and the consent principle, is how that British identity can be reconciled with a republican view that nothing positive emerged from our past membership of the UK?

It is a while since the Irish State or politicians grappled with these issues. We talk about the financial obstacles to unity but surely when there is a will a way can be found. It might be that we find the cult- ural challenge too demanding?

Redmond will be 100 years dead in 2018. The issues he grappled unsuccessfully with are no less complex today. No generation of Southern republicans has resolved them and Adams is grappling with them now. Redmond dealt with them in honour and in good faith, and remained committed to being a persuader for an all-island settlement. In the end Redmond failed, but he has not been alone in that.

Rónán O’Brien was a political adviser to the last government