Garda Síochána has little room for complacency on human rights

Risk in Ireland comes from failure to acknowledge endemic issues 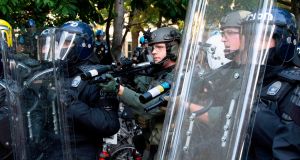 We watch in horror what seem like re-enactments of race riots from another time in the United States, where the armed police don’t even disguise their racism and are emboldened in their violence by a race-baiting, Bible-wielding president, whose professed purpose in power is to “make America great again”.

By contrast, we are emerging from a pandemic lockdown of sorts, in which An Garda Síochána is deservedly praised for the consensual approach taken to implementing what were by any measure draconian emergency powers and for increased visibility in communities. The temptation to feel smug is real but we should pause before over-celebrating our upright consciences.

A risk of using odious comparisons is that we allow ourselves too much latitude and forgiveness. This is especially a problem in the area of human rights, where states can misuse international standards to benchmark themselves against errant or rogue states in order to look good. Human rights compliance is particularly tricky in the field of policing.

One approach is to see human rights obligations in areas such as arrest and detention or the management of public demonstrations as a checklist that is ticked to indicate compliance. As most human rights are qualified, ticking the compliance box can be easier than objecting to the right itself.

Another approach is to take a more oppositional approach that focuses on the tension between individual rights and community interests, almost always viewing human rights as the enemy of policing. However offensive this latter approach may be, it is arguably a more honest approach than box-ticking. Both approaches are, of course, flawed and reduce human rights to moral abstractions of varying levels of inconvenience.

In setting out a blueprint for radical policing reform, the Commission on the Future of Policing in Ireland, which reported in September 2018, proposed 10 key principles, the first of which is: “Human rights are the foundation and purpose of policing.” It laid an unapologetic emphasis on the importance of policing with communities and on the ideal of community safety in which An Garda Síochána would work with others – State and non-State actors – to reduce harm and address vulnerabilities.

Underlining the need to move away from the notion of a "police force", the commission proposed a variety of measures to enhance a "policing service" that works collaboratively and in a non-monopolistic way on community safety, harm reduction, crime and national security.

In taking this approach the commission chose not to conceptualise individual human rights and community or societal interests as existing in perpetual tension. Rather, it viewed the human rights framework as providing a balanced value system that any modern policing service should exist to promote and defend, and An Garda Síochána responded immediately by establishing a human rights unit. It is easy to dismiss all of this as high-minded shibboleths but dismissive responses add little or nothing to our understanding of problems, nor to solving them.

Of course there are cultural, political and historical factors that make the ugly occurrences of the past week in the US less likely here. The greater risk in Ireland comes from complacency and failure to acknowledge endemic issues of exclusion and discrimination that may be less visible here or that may even be denied.

If you come from a racial or ethnic minority or as an immigrant to this country will you feel you can speak without fear to a police man or woman? If you have mental-health issues or some form of disability will the guard understand you or empathise with your predicament? If you are a member of the Traveller community will you view An Garda Síochána as an agency where you will get a fair hearing free from bias? If you live in a marginalised community, where your social and economic disadvantage is an intractable and painfully lived experience, will you see the local guard as an ally or an enemy or will you even see a local guard? If you experience domestic violence or are the victim of abuse will you view the policing service as a support or an obstacle?

In all of these areas there is evidence of good policing and bad policing. Ireland is no exception in this regard. While the mechanism for dealing with complaints arising from bad policing – the Garda Síochána Ombudsman Commission – is crying out for urgent and radical reform, there is some cause for optimism from the oversight on human rights and other matters being provided by the Policing Authority and the manner in which its processes are being engaged with by Garda management.

There is also a crucial role for statutory bodies such as the Irish Human Rights and Equality Commission (IHREC) and NGOs such as the Irish Council for Civil Liberties. People will often complain that oversight bodies or watchdogs do not know what it’s like ‘on the ground’ or ‘in the heat of the moment’ but absent such accountability the conditions for bad policing and impunity become rife.

Antagonism is not the only tool in the human rights toolbox. Working with bodies such as IHREC, An Garda Síochána can set standards for implementing the public-sector positive duty under section 42 of the IHREC Act in the areas of human rights and equality. This work, which is already under way, needs to be more visible and more clearly articulated as an essential element of a reinvigorated commitment to policing with communities.

Human rights can only be the foundation and purpose of policing if the police are working with communities. These are not slogans or brands to make An Garda Síochána look better. When pandemic policing subsides and ‘normal’ policing resumes we would do well to reflect on what worked and what did not, and to build on the success of a renewed engagement with communities.

Donncha O’Connell is a professor of Law in NUI Galway. He was a member of the Commission on the Future of Policing in Ireland

1 Nphet signals strong opposition to parts of Government plan to exit lockdown
2 Karlin Lillington: How I managed to cut my mobile phone bill by at least half
3 Admission of mistake in Oxford vaccine dose raises doubts over reliability
4 ‘He’s Jekyll and Hyde’: The inside story of an Irish barrister and conman
5 Ireland could lose out as France lays claim to most of €5bn Brexit compensation fund
Real news has value SUBSCRIBE