Frank McDonald: Why ‘Dart Underground’ should not be cast aside

Ministers seems focused on the price, but this could regenerate the rail network 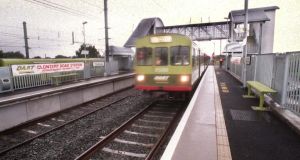 Proposals to integrate Dublin’s disparate rail services have been kicking around for a century or more.

Proposals to integrate Dublin’s disparate rail services have been kicking around for a century or more. But the latest plan – branded “Dart Underground” – has been scrapped by the Government in favour of extending the Luas Cross City line to Dublin Airport.

One wonders what planet Minister for Transport Paschal Donohoe inhabits or whether any of his Cabinet colleagues have a clue what Dart Underground was about, apart from casually glancing at the €2 billion price tag before concluding that we can’t afford it.

For a start, this had nothing to do with serving Dublin Airport. That was to be done with Metro North, an even more expensive scheme that would have involved putting a Luas line underground for much of its length between St Stephen’s Green, the airport and Swords.

Conceived during the boom years, Metro North ran up bills amounting to €180 million – including the installation of a station box on the Mater hospital site at a cost of €20 million – before it was “deferred” (along with Dart Underground) in 2011 due to funding difficulties. It was stressed at the time that both projects were being “deferred, not cancelled”. A statement from the Department of Transport said they “remain key elements of the overall integrated transport strategy and will be progressed when fiscal and market conditions improve”.

That’s not what’s happening now, however. An extension to the €350 million Luas Cross City line (now under construction) from Broombridge in Cabra, tunnelling underneath Glasnevin Cemetery, is now being put forward as an alternative to the daft, disruptive Metro North scheme.

There is no alternative being offered for Dart Underground, because there isn’t one. Running from Inchicore to Spencer Dock, via Christchurch, St Stephen’s Green and Pearse Station, it is the “missing link” in terms of integrating all Dublin suburban rail services. 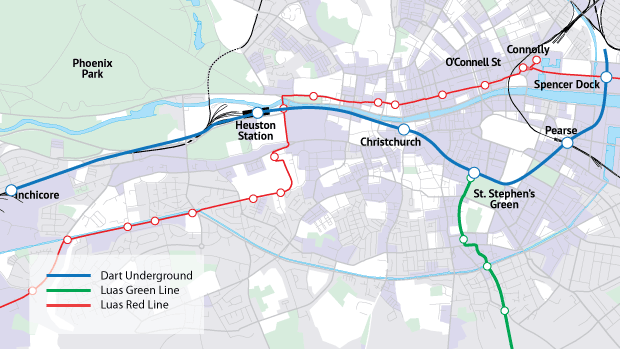 Commuters on the Northern Line serving Drogheda and Dundalk would be able to travel to Kildare or Maynooth, and vice versa. Similarly, Dart commuters could switch to one of the other lines by going down an escalator in Pearse Station, at Westland Row.

It is, in effect, the Dublin equivalent of London’s £14 billion (€19.2 billion) Crossrail project, which involves boring 42km of tunnels to provide a new high-frequency east-west rail route beneath the city centre, relieving pressure on the overcrowded London Underground.

Not for nothing has Iarnród Éireann described Dart Underground as “the crucial final link that will release the full potential of an expanded and improved rail network into and out of Dublin”, transforming public transport by enabling many more trains to be run in every direction.

Dart Underground, approved by An Bord Pleanála in April 2014, would require two tunnel boring machines to excavate twin-tube tunnels 25 metres below street level over a distance of 7.5km between Inchicore and Spencer Dock, with four intermediate stations on the route.

Iarnród Éireann received “expressions of interest” in a public-private partnership project for the rail interconnector (as Dart Underground had previously been called) from international consortiums back in 2010, but had to put these on ice pending a final Government decision.

The view in 2011 was that “in the context of reduced resources, larger public transport projects proposed such as Metro North and Dart Underground, which were to be advanced as PPP projects but which require very significant Government contributions, cannot proceed at this time.

“Given current financial market conditions and taking account of Ireland’s general economic circumstances, it is unlikely that private investors would be willing to commit the level of funding necessary for these major infrastructural projects for some time.”

Four years later, this is no longer the case. As major projects such as the Poolbeg incinerator have shown, prospective PPP partners no longer have any difficulty in raising funds for Irish ventures; the previous bar has been lifted by our radically different economic outlook.

One wonders what criteria (if any) the Economic Management Council – Taoiseach Enda Kenny, Tánaiste Joan Burton, Minister for Finance Michael Noonan and Minister for Public expenditure Brendan Howlin – will use in deciding which projects will proceed and which will not.

Certainly, there was a notable absence of rigorous analysis when approval was given for a new motorway between Gort and Tuam, in Co Galway, at a capital cost of €550 million – even though this grossly overblown road will only reach a quarter of its design capacity in 2030.

Why is it that there’s unlimited funding available for ghost motorways and nothing at all for projects that make sound sense in economic, social and transportation terms?

Dart Underground fits into this latter category and deserves a better hearing than it’s got from Ministers so far.

1 Prof Sam McConkey: This is the beginning of the second Covid-19 wave in Ireland
2 Mike Murphy: ‘I won’t do another over-70s lockdown’
3 The far right rises: Its growth as a political force in Ireland
4 Coronavirus: Public health experts considered moving Dublin to Level 4
5 Blanchardstown, Tallaght top table for highest Covid-19 rates
Real news has value SUBSCRIBE