Fire and brimstone – An Irishwoman’s Diary on Californian catastrophes 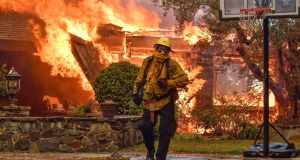 ‘Ever get the feeling God has a secret plan for California?” asks my godson Dara, deadpan Dub wit that he is.

You think you have it bad? For months we’ve been through droughts, quakes, wildfires, floods, mudslides, landslides, avalanches.

First-borns next? It sounds biblical.

Our SF Chronicle lists fires over its masthead under “Weather & Storms”, adding live interactive fire maps with shelter and deaths.

Brown is throwing a global climate action summit here in September. He got a verbal spanking from the president for being immigrant-friendly while Trump was showing off his $16 billion border wall recently.

So is the Almighty hatching punishing us by sending fire and brimstone for too much wine, weed and godlessness?

The windstorm that sparked near Calistoga created ferocious infernos late October 8th, when locals were full of wine or weed, never got warnings, or got them late.

Who has landlines now? Who answers phones? We don’t. We text. We hate phones. But after the Nun, Tubbs and Coffey blazed throughout October, 45 lives were lost, many are missing, 9,000 homes are ashes and it’s partly why.

A 34-page report just out from the Office of Emergencies found many victims opened doors next day to be suddenly overwhelmed by fumes, flames, falling trees and power cables. They had to find car keys. Many wouldn’t leave pets.

Did victims anticipate getting trapped inside garages as power grids collapsed? No. Nor had they packed “Go Bags”. Or found their car keys.

The wine harvest was almost barreled when fires began. Santa Rosa is seat of Sonoma’s Wine Country where wineries and scores of thousands of pickers produce jammy Zins, Cabs and oaky Chards among hills richly upholstered with emerald oaks and ancient redwoods.

Beloved by Hitchcock, who filmed here, by RL Stevenson who honeymooned among the first wineries, and Jack London whose house survived, Sonoma is touristy for good reasons.

Winemakers like the Mondavis and Schramsbergs built dynasties and turned this Eden into a poem of Jeffersonian husbandry, and the state’s mightiest earner.

And the Wine Country’s still in business, if sadder and wiser, and keeping a “Go Bags” ready by the door.

It was impressive to see how business is coming back at a writers’ dinner in the mid-century Flamingo Hotel. We talked about what to pack. Laptops! Would we upload documents online and stash them in the cloud or just drag safes outside? Would we shoot water thanks, as some did? Writer Yvonne Horn says she’s just going to remember clean underwear next time.

Most just grabbed their pets, turns out.

The saddest story was of Monte Kirven, a renowned falconer who lived off Mark West Springs. He’d been training a brand new bird.

An astonishingly youthful 81, Doctor Kirven was the biologist who saved peregrine falcons from extinction. He helped ban DDT, inventing ways to protect their eggs and bringing numbers back. He taught college, worked for Bureau of Land Management, and was a lifelong warrior in the cause of nature.

Dr Kirven trained his falcons off Linda Lane in the house he built himself. As Tubbs fire erupted, his son Brian – a writer who lives in Point Reyes – began calling his mobile. But signals were dead and he’d cut off his landline.

Shelters were overwhelmed and off limits to callers. Brian and his siblings (who drove from San Diego) endured long, tormenting days of hope.

When fires finally cooled enough for emergency workers to escort them to their father’s, the first thing they saw was a fallen trunk blocking the drive. Beyond it they saw, “just heaps and heaps of ashes, and we found some bone chips that matched his DNA where his bed used to be”.

He probably died in his sleep without knowing what happened. They hope so, but they will never know.