Fintan O’Toole: Why we will not miss the 31st Dáil

Elected with a huge mandate for radical democratic change, it lapsed into collective indifference and impotence 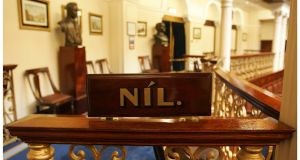 This fecklessness matters. It means that ministers can get away with pretty much anything. Photograph: Alan Betson

The 31st Dáil should be sent on its way with the words of Oliver Cromwell to the rump parliament of 1653 ringing in its ears: “You have been sat too long here for any good you have been doing. Depart, I say, and let us have done with you.” The Dáil is not so much dissolved as put out of its misery. Elected with a huge mandate for radical democratic change, it lapsed into collective indifference and impotence. Some TDs did excellent work. Most allowed their own institution – and by extension the people who elect it – to be treated with contempt. It leaves us as voters with two lessons: don’t give governments such large majorities that they can treat parliament as a sideshow. And don’t vote for candidates whose primary value is obedience to the very people they are supposed to be holding to account.

The 31st Dáil departed in appropriate ignominy. On Tuesday night, it voted on the Technological Universities Bill, a boring but important piece of legislation. The vote was 30 for the Government’s proposals and 17 against. So 47 TDs voted. That’s a turnout of 28 per cent.

Now imagine a 28 per cent turnout in the general election. There would be weeping, wailing and gnashing of teeth. We, the voters, would rightly be excoriated for apathy, fecklessness, a dereliction of democratic duty. But we’re being asked to turn out to vote for people, many of whom won’t themselves turn up for a vote.

This fecklessness matters. It means Ministers can get away with pretty much anything. In most democracies, it is a very big sin to mislead parliament. Here, it’s a great laugh. So in November 2011, Stephen Donnelly asked Michael Noonan in the Dáil whether Jean-Claude Trichet had threatened him if he burned the remaining Anglo Irish Bank bondholders. Noonan reacted like a southern belle defending the honour of her beau: “With regard to threats, the ECB does not operate that way. Jean-Claude Trichet is a perfect gentleman.”

The banking inquiry last week confirmed what we’ve long known – Trichet did threaten a sovereign government that “a bomb would go off in Dublin” if it put the interests of its own citizens ahead of those of a small group of high- stakes gamblers who bet on the wrong horse.

And Noonan’s explanation for denying this in the Dáil? When Trichet warned him of a financial explosion, it wasn’t a threat, it was merely “a prediction”. A man holding a big bomb said a bomb would go off if we didn’t hand over our money. But that wasn’t a threat. It was just a coincidence that Gentleman Johnny had a bomb in his hand when “predicting” that someone might blow us if we got stroppy.

The point about this bull is that everyone knows it’s bull – especially Michael Noonan. It’s served up with a knowing, self-congratulatory smile. It’s cute and clever and great gas. And at least half our TDs love it. They admire Noonan for the skill with which he withheld crucial information from them in 2011, just as they thought he was great last year when he stonewalled Catherine Murphy’s questions about Siteserv, refusing to reveal that his own department shared many of her key concerns. It’s all a game and Noonan is a consummate player. Who cares that vast amounts of public money – money that could transform the lives of many citizens – are at stake?

The Dáil is institutionally masochistic. Before Christmas, for example, the Government guillotined a very important piece of legislation, the International Protection Bill, highly relevant to perhaps the great issue of our time – the refugee crisis. The “debate” was an unholy mess, with deputies clearly losing track of what amendments they were voting on, never mind what those amendments meant.

‘Making a show of yourself’

So there are simple question to be asked of every outgoing TD on the doorsteps: how much trouble did you cause over the last five years? Give us just one example of how you did your job of enforcing accountability. Did you vote on legislation when you didn’t have a clue what it contained? Did you let a Minister away with misleading you? If you can’t show you have a backbone, you shouldn’t be standing.

1 Coronavirus: Non-essential travel from US set to be banned within days
2 Covid-19 incidence in the Republic set to surpass that of UK
3 ‘Our hearts are broken’ – implications of fresh lockdown sink in
4 German nudist chases wild boar that stole laptop at Berlin lake
5 As Irish economy reawakens, we find Sleeping Beauty has a hangover
Real news has value SUBSCRIBE