Fintan O’Toole: We will hurt only ourselves by appealing Apple ruling 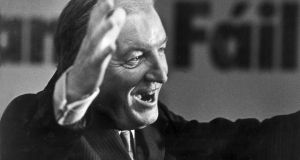 Are we really going to defend the Ireland of the great kleptocrat Charles Haughey? Photograph: Colman Doyle

Well, at least it’s an innovative way to commemorate the centenary of the first World War. Enda Kenny is re-enacting John Redmond’s rallying cry: go to Europe to defend, as he put it so movingly last week, “the rights of a small nation”.

We will send our brave and patriotic lawyers to the fields of Belgium and northern France (Brussels and Strasbourg standing in for Ypres and the Somme) to fight to the last drop of our taxpayers’ money against the Apple-scrumping Hun. You can already hear the huzzahs all the way from Greece, whose fight against the overweening EU commission Michael Noonan so gallantly encouraged by mocking the Greeks for producing nothing but feta cheese.

But before we all pull on the green Apple jersey, let’s stop and think about what we’re doing and what we’re saying about ourselves to the world. There really is such a thing as the national interest. It is an interest in not being seen as a rogue state. And appealing the European Commission’s ruling on what Apple’s boss, Tim Cook, called in the US Senate its “tax incentive agreement” with Ireland is utterly against that national interest.

The first alleged reason is outrage at the idea – the very idea! – that the State could have done anything dodgy. Let’s be clear: there is not a shred of evidence that any individual in the Revenue or elsewhere knowingly broke Irish or EU law. But the broader proposition that we must fight in the last ditch to insist that the Ireland of 1991, when the Apple deal was done, was pure as a handmaiden of Knock, is risible. This was the Ireland of the great kleptocrat Charles Haughey, the Ireland whose super-elite was evading tax through the notorious Ansbacher Cayman scheme and whose ordinary elite was evading tax through bogus non-resident accounts with the collusion of our major banks. And it was the Ireland in which the Revenue was unable to enforce the most basic tax laws against anybody with enough money to employ a clued-in accountant. And we’re going into the trenches to defend its honour?

The second alleged reason that we have to appeal is because the Apple ruling sets a dangerous new precedent for the commission to use competition rules to encroach on Ireland’s sovereign capacity to set its own tax laws. No, it doesn’t. The commission has been doing exactly the same thing for years. In 2003, for example, it ruled that Ireland’s so-called Foreign Income Scheme was illegal state aid. The 2003 ruling stated that the scheme’s “tax benefits were selective . . . Such a selective advantage constitutes an incompatible state aid”. Sound familiar? If this is a matter of principle, why did Ireland not appeal in 2003? Simple – because the 2003 ruling did not hit any multinational corporation in its pocket.

The third reason we have to appeal? Because the Apple ruling is an assault on our 12.5 per cent corporation tax rate. No, it’s not; it’s about our failure to apply that rate fairly to all companies. Listen to the person on the real frontline, Martin Shanahan of the IDA: “This does not call into question Ireland’s tax regime and it does not call into question Ireland’s tax rate.” If we really want to get into the patriot game, we might say that what is truly unpatriotic and damaging to investment is the hysterical claims to the contrary.

And last, we have to appeal because the ruling is disastrous for Ireland’s ability to attract foreign investment. So why did Tim Cook insist last week that the ruling has had no effect even on Apple’s own plans to expand its Irish operations? And why did Shanahan tell RTÉ’s Morning Ireland yesterday that “this process has been going on for three years . . . It hasn’t caused investors any concern to date . . . The investors I’ve spoken to over the last week really believe that this isn’t something that’s going to impact on them”?

This is the very image we’ve been trying, with some success, to shrug off. We’ve made much of getting a clean bill of health from the OECD. Yet the OECD’s head of tax, Pascale Saint-Amans, says “the Apple case is a great illustration of the most aggressive type of tax planning that is out there”. And we’re going to go out before the world to defend exactly the type of tax gouging that we say we don’t do any more. If we stand up for our sins, who will believe that we have reformed?

But never mind: over the top and march towards those machine guns!