Fintan O’Toole: How hopes raised by the Constitutional Convention were dashed

‘All it’s really done is to polish up the sign on the gates of institutional democracy: abandon hope all ye that enter here’ 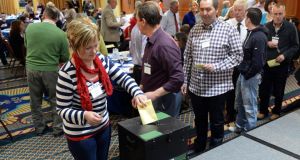 ‘The Constitutional Convention’s expert advisory group did sterling work. Over 2,500 civil society groups and individuals made submissions. And the citizen members impressed everyone by their diligence, seriousness and open-mindedness.’ Above, voting taking place at the Constitutional Convention meeting in Malahide, Co Dublin in 2013. Photograph: Eric Luke / THE IRISH TIMES

Politicians often complain about public cynicism and usually blame the media for it. But the nabobs of negativity have nothing on the political system itself. Cynicism is both its life’s blood and its product. If you want a perfect case study in how to manufacture cynicism, look no further than the fate of the constitutional convention. It has turned out to be one of those machines that sucks in hope, civic responsibility, public commitment and intellectual energy at one end and spews out perfectly packaged, neatly wrapped bundles of futility at the other. The process is so well calibrated that one can only conclude that it was designed with this purpose. Cynicism isn’t an accidental byproduct. It is the nature of the exercise.

The Cconstitutional Cconvention was the Big Idea of the incoming coalition parties. Both Fine Gael and Labour knew that there was a widespread belief that the existing system had failed utterly and needed an urgent and radical redesign. Both ran in the 2011 election with (slightly different) versions of the same innovative and exciting proposal. Let’s get randomly chosen citizens, feed them with all the expert witnesses they need, and ask them to come up with answers to key questions about the Constitution. And when they’ve done that, let’s put those proposals all together in a referendum to their fellow citizens. Fine Gael even had a name for this grand moment of public renewal: Constitution Day.

It’s important to remember that the constitutional convention wasn’t just a notion. It was established by law with all due solemnity by a vote of both houses of parliament. Some of us argued that its remit was far too narrow and that, in particular, the absence of any statutory commitment to actually put its recommendations to the people was a fatal flaw. Yet, when it got under way, it looked like it just might prove such scepticism to be ill-judged. By all accounts, the convention was very well managed by its chair, Tom Arnold. Its expert advisory group did sterling work. Over 2,500 civil society groups and individuals made submissions. And the citizen members impressed everyone by their diligence, seriousness and open-mindedness.

And in a sense this makes the whole thing much, much worse. If the convention was just another empty ritual, the damage would be minimal. But the people who were involved really cared about this thing and did everything they could to make it a model for new ways of thinking about democracy in the 21st century. There was a glimmer of hope that some kind of dignity was being restored to the political process. Instead all it’s really done is to polish up the sign on the gates of institutional democracy: abandon hope all ye who enter here.

And after this Government? The excellent reports of the convention will be placed on shelves already groaning with other excellent reports. If you want to see the precedent, go to archive.constitution.ie It’s a lovely digital mausoleum in which are interred no fewer than 10 fine reports from the All-Party Constitution Review Group that laboured for year after year in the 1990s. If you have the patience, you can note that even the proposal to lower the voting age in presidential elections is already there – from a report published 17 years ago in 1998.