Fintan O’Toole: Belfast agreement is a threat to the new English nationalism 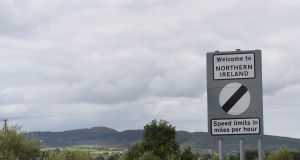 A sign saying welcome to Northern Ireland is seen on the border of Armagh and Louth in Ireland. Photograph: Clodagh Kilcoyne/Reuters

Northern Ireland is not Lincolnshire or Somerset. It is a distinct and unique political entity, recognised as such by an international treaty registered with the United Nations: the Belfast Agreement of 1998.

Its people have a right to consent to the political arrangements by which they are governed – and they did not consent to being removed from the European Union.

The Brexiteers don’t give a damn about Northern Ireland. In fact, at least two of the leading candidates for leadership of the Tory party, including the woman who is most likely to be the next British prime minister, Theresa May, are actively hostile to the Belfast Agreement.

Michael Gove, who is what passes for the intellectual driving force behind Brexit, utterly despises the 1998 peace deal. In The Price of Peace, his long pamphlet for the right-wing Centre for Policy Studies, published in 2000, Gove characterised the entire peace process as nothing more than a capitulation to the IRA. He insisted that the cause of the Troubles was British lack of firmness in facing down demands for a united Ireland and argued that, if only British governments had taken a harder line, the IRA would have become discouraged and given up. This is idiocy but, like Gove’s Brexit theorems, dangerous idiocy.

The core of Gove’s jeremiad is that the Belfast Agreement is a threat to the British system of government and law. Underlying this attack is a sense that it would be better to destroy the peace deal, at whatever cost to the people of Northern Ireland, than to allow this monstrosity to undermine a conservative vision of Britishness.

And, if we cut away the hysteria, Gove is right. The Belfast Agreement, with its support for multiple identities, contingent sovereignty and externally guaranteed human rights, makes Northern Ireland a very different kind of political space to the rest of the UK. It is indeed incompatible with the kind of English conservative vision that is now in the ascendant.

This perception, crucially, extends beyond Gove, who is not going to be the British prime minister who negotiates Brexit. That will probably be Theresa May. So what does May think of the Belfast Agreement? Her antipathy is quieter and less explicit, but she is essentially Govian. We know this because her signature political issue has been the scrapping of the UK’s Human Rights Act, ending the jurisdiction in the UK of the European Court of Human Rights.

And this is a straightforward intention to impugn the Belfast Agreement. In that agreement, the British government commits itself to “complete incorporation into Northern Ireland law of the European Convention on Human Rights, with direct access to the courts and remedies for breach of the convention, including power for the courts to overrule assembly legislation on the grounds of inconsistency”.

May’s intention is, in effect, to withdraw unilaterally from this international treaty commitment, thereby undermining British commitment to the agreement. Her reasoning is essentially the same as Gove’s: the Belfast Agreement contains concepts and commitments that are not compatible with the resurgent conservative vision of English law and governance.

The Government has to speak very, very clearly about this: Northern Ireland is not an English shire but a distinct polity with a recognised right to determine its own future – within the EU.