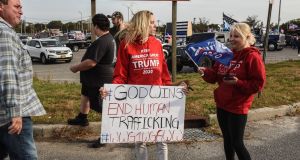 A woman holds a sign for the QAnon conspiracy theory during a pro-Trump rally: adherents believe the world is run by a cabal of paedophiles. Photograph: Stephanie Keith/Getty

Anti-lockdown protests have become a regular feature of our world gripped by the Covid-19 crisis. Just last weekend Dublin saw one descend into violence, among countless similar incidents across Europe and the United States in recent months.

It may be perfectly reasonable to assume many attendees are simply expressing consternation at an overweening government presence in our day to day lives; a distrust of lockdown founded on a pseudo-libertarian ideological basis; or a dismay at the negative knock-on effects lockdown may have on mental health, the economy, and an array of other societal troubles.

But emerging from all of this too is something far more sinister – the increasingly grave sense that a strand of conspiratorial thinking is taking hold. What may have started as a relatively low-stakes conversation about the government’s handling of the pandemic appears to have snowballed into something greater, as conspiracies emerge that Covid-19 is a hoax; that it was created in a laboratory; that it is a ploy by so-called Big Pharma to brainwash populations with a large scale vaccine programme; that Bill Gates is also, somehow, in on it.

These ideas are as fanciful as they are malign, of course. And though it may be rare to encounter such views as we go about our daily life (most people are not conspiracy theorists), cursory glances at social media reveal the full scale of the phenomenon. Claims that 5G internet caused coronavirus saw several 5G internet towers destroyed and vandalised across the UK – evidence enough that this mode of thinking is very real, with tangible impacts.

It would be a mistake to pass this off as a mere flash-in-the-pan reactionary moment. In fact, a pandemic is fertile ground for feeding conspiracy and provides a vehicle for established conspiracy theorists to recruit new members to their ranks. Exactly why conspiracy thrives in a time of crisis is a question academics have long been grappling with and understanding the root may be the key to preventing it from taking hold.

Lockdown was an isolating time for many and it may well be the case that internet chat forums and social media groups dedicated to these ideas offered solace, refuge and a sense of community to those in need. So too, in a time of upheaval, is it compelling to seek clear explanations for things that are hard to understand.

It is, for many, psychologically distressing to be submerged into the chaos of a world trying to function with Covid-19 – a disease we are far from fully understanding and a situation we are far from adept at navigating. Rather than flounder in the reams of constantly changing information, it is much easier and more comforting to explain it away via conspiracy – that someone is causing this; that the government is lying in pursuit of an ulterior motive; that there is a secret structure and a hidden agenda.

But not everything is about a search for a deeper meaning, or a bid to understand a chaotic world that eludes easy explanation. Boredom too can be a driving factor. James Johnson, former pollster for 10 Downing Street, found that the inclination for certain people to indulge in conspiracy (in the wake of the 2017 Salisbury poisonings) was often rooted in a sense that it is simply something, comparatively interesting or amusing, to do. Amid the endless battering ram of the news cycle – at that time preoccupied with Jeremy Corbyn versus Theresa May and Brexit – boredom creeps up and a relatively harmless discussion about who really poisoned the Skripals catches on as a sort of game.

The basis for Covid-19 conspiracy may well be complex and multifaceted and proponents of the latest theory du jour may in fact have little shared psychology. But what may have initially started as a harmless toe dip into the realm of Covid-scepticism for many has spiralled into a serious concern. Not least because of the very obvious impact large-scale Covid conspiracy will have on human life. And also because we are seeing a worrying convergence between the so-called pandemic truthers and the alt-right. The alt-right presence at many anti-lockdown protests ought to be sufficient evidence of the way these ideas interact. A report by the United Nations Security Council warned that extreme right-wing groups in the US sought to exploit the pandemic to radicalise and recruit people.

The Guardian found that the prevalence of other conspiracies associated with the alt-right – notably QAnon, a widespread belief that the world is run by a cabal of paedophiles – enjoyed soaring support as the pandemic took hold.

Crisis begets conspiracy. But this symbiotic relationship is a tricky one to navigate and even harder to combat. And though the contingent of people who believe coronavirus to be a hoax; or who believe the figures are manipulated by malevolent politicians in the pursuit of something even more sinister is seemingly small – it would be a grave error to dismiss the phenomenon as a facetious concern.