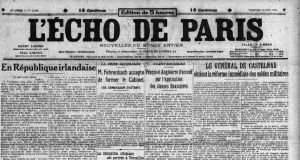 The daily broadsheet L’Echo de Paris sent a reporter to Ireland to cover the War of Independence. His first article made the front page on June 18th, 1920.

One hundred years ago, in the middle of the War of Independence, a French newspaper sent a reporter to Ireland. His job was to send back a series of articles about what exactly was happening in what was then a corner of the British empire.

Sections of the French press had long held a kind of affection for Ireland, which they termed “la verte Érin”. They saw the Irish as kindred spirits, Celtic cousins and, of course, a thorn in the side of their old enemy, Great Britain.

While many French journalists wrote sympathetically about Ireland’s plight at this time, the writer, bylined as “H. Regne”, of this series of special articles was a little more lukewarm and maybe even a bit biased towards preserving the union with Great Britain.

His trip did not start well. When he crossed the Channel to Newhaven on the southeast coast of England, a British border guard asked him “Are you really going to Dublin?” “It’s not the best time to be going there. You would be better off going home,” he told the Frenchman, before saying, “After all, that’s your own business.” He stamped his passport and sent him on his way, wishing him “bon voyage”.

The guard was obviously a little surprised when he heard that the newspaper man was visiting a place that was making the news for all the wrong reasons. In 1920 alone, over 280 people died in the War of Independence. This includes IRA volunteers and civilians, as well as British soldiers and RIC members.

The special correspondent for the daily broadsheet L’Echo de Paris arrived in Dublin during the height of summer. His first article made the front page on June 18th, 1920. It offers a mix of travelogue and crime fiction novel, with the atmosphere building up to reveal moments of high drama. The writing is informative and entertaining.

In the four weeks that he spent in Ireland, he took the pulse of the nation with a series of interviews with political and church leaders. His lengthy articles were spread out over the course of the summer, appearing in the newspaper in June, July and August 1920. His first interviewee was Dr John Henry Bernard, provost of Trinity College Dublin.

They discussed the prospect of partition and an independent Ireland, which the provost was opposed to, saying that Ireland would be better off by remaining in the union. This view was echoed by another interviewee, Sir Horace Plunkett, who was a fervent supporter of dominion home rule, which was like the arrangement that Canada or Australia had.

From Trinity or “the veritable citadel of Protestant thought and Anglo-Saxon culture”, as he referred to it, the journalist’s next port of call was Maynooth, which he termed “the real home of nationalism” and “the centre of resistance of Anglo-Saxon absorption”. There he met Cardinal Logue, who was conciliatory in his outlook.

He also met a philosophy lecturer named Dr Coffey, who was much more forthright in his political view. He said that the people should be allowed to choose whether they wanted to remain in the union or have full independence. All of the young clerical students in what he called “the Irish Vatican” were “enthusiastic supporters of Sinn Féin”, according to the journalist.

The journalist said that the head of the self-proclaimed “République irlandaise” did not live in an Irish version of the sumptuous Elysée palace and was not surrounded by layers of security, as his French counterpart would have been. Instead, Arthur Griffith, founder of the Sinn Féin party and vice-president of the Dáil, who was described as being of average height and having the vigour of “a mountainy man of the west”, came to meet his interviewers. Griffith spoke about the Dáil, the composition of the government and the various ministries, as well as future plans. Griffith comes across as a confident and capable politician. The article was picked up by several Irish newspapers, who termed it “a remarkable interview”.

The journalist’s itinerary would have been planned with assistance from the Dáil’s Publicity Department. During these years, they worked actively to garner support for Irish independence among the foreign press corps, meeting visiting journalists and producing pamphlets and other supporting materials. Historian Arthur Mitchell said that “they husbanded British journalists and other visitors, largely American, who were drawn to the exciting events in Ireland”. The French journalist says that “they would move heaven and earth to please you”.

This special series of newspaper articles ended in August 1920. The next time that L’Echo de Paris focused on Ireland was to discuss the fate of Cork’s lord mayor Terence MacSwiney, who was on hunger strike in Brixton prison. His tragic story would become a cause célèbre, capturing the imagination of readers all over the world.