Even invisible illnesses deserve to be recognised 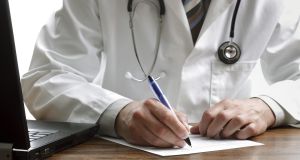 Fibromyalgia is not a well-known illness and, until relatively recently, was often written off as a hypochondriac woman’s disease because it afflicts far more women than men. Photograph: Thinkstock

Recently, I was listening to Adrienne Dempsey and Marrisa Appel on the Ray D’Arcy Show discussing fibromyalgia.  It is a chronic pain illness characterised by widespread muscle pain, sleep disturbances and profound fatigue. The women were advocating that fibromyalgia be added to the HSE’s list of long-term illnesses that are eligible for free medication.

Good luck with that, I thought. The long-term illness list has not changed since the 1970s and many common debilitating illnesses are not included, such as severe asthma, rheumatoid arthritis or endometriosis.

Fibromyalgia is a much less known illness and until relatively recently, was often written off as a hypochondriac woman’s disease because it afflicts far more women than men.

I got diagnosed by accident. I was in A&E for something unrelated and two very young doctors got alarmed at the degree of tenderness I reported

Dr Irene Tracey, nicknamed the “Queen of Pain” for her Oxford research on the neuroscience of pain, has a useful analogy. She says we may all be predisposed to suffer pain to different degrees, but for chronic pain patients, including fibromyalgia sufferers, it is as if the volume knob of pain were turned all the way up and jammed there permanently.

Many people have asked me to write about fibromyalgia over the years but I never have until now, partly because I am lucky enough to have a mild form of the illness. I am also atypical in never having encountered scepticism or difficulty in securing a diagnosis.

I got diagnosed by accident in the early 2000s. I was in A&E for something unrelated and two very young doctors got alarmed at the degree of tenderness I reported when they prodded my stomach.

They made a diagnosis of appendicitis. Later, a surgeon in full green scrubs popped his weary head around my curtain, spotted a chair, dropped into it and asked me if I minded if he put his feet up on my trolley while he figured out if he needed to remove my appendix.

Feel free, I told him. Then I said that I felt that reporting pain when prodded was a very unreliable way to diagnose appendicitis, given that I was likely to react the same way if I were prodded anywhere – my arms, my legs, my back. He paused, looked at the ceiling thoughtfully, asked me about my sleep patterns and how much my body hurt on any given day.

Then, much more kindly than it appears in print, he asked me to get out of his emergency department and go and talk to my GP about fibromyalgia.

So, off I went, and – in stark contrast to most people with fibromyalgia – met with a kind, informed response from my doctor. He confirmed the diagnosis and told me he had about 10 other patients, all women between the ages of 30 and 50, with the same condition.

Sometimes I get what sufferers call a flare and I happened to have had one since before Christmas. I feel battered all the time

So, what is it like? I almost never get a good night’s sleep. I go to bed tired and get up exhausted. I also have restless leg syndrome and an old back injury, which does not help. I am stiff in the morning, so I sit on the bed for a while and stretch in order to get mobile. I am never pain-free but most of the time it is a kind of background pain that I would be embarrassed even to mention.

Sometimes I get what sufferers call a flare and I happened to have had one since before Christmas. I feel battered all the time, with burning pain all down my limbs and in my ribs and back.

Everyone I have met with fibromyalgia has their own favourite comparison to describe the sensations, whether it is having a hod of concrete blocks dropped on you, or, my own favourite, as if I have been beaten with a stick.

Sometimes the pain is stabbing but most of the time it is a burning sensation just under my skin that leaves me worn out. When it is bad, I also have allodynia – abnormal pain reactions. A pat on the arm can leave me swallowing a yelp of pain.

Even when I have a flare, I consider myself well off in comparison to others. Many people can no longer work full-time and others are no longer able to work at all. Having fibromyalgia recognised as a long-term illness would really help them.

I know a grandmother who cannot hug her grandchildren because it just hurts too much, and mothers who battle feelings of failure because they do not have the energy to care for their children as they would like.

We all have one thing in common, though. All of us have been told that we do not look sick, or like someone with a chronic illness. It is usually not meant to invalidate but it often has that effect.

The list of long-term illnesses that receive free treatment in France is easily twice as long as our list and includes musculoskeletal disorders even though fibromyalgia is not specifically mentioned.

Getting severe fibromyalgia on to the HSE list would not only ease financial burdens, it would help people to realise that even when you do not look sick, you can have a nasty, unpredictable disease.