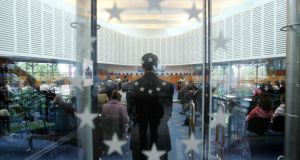 This week marks the 70th anniversary of the signing of the European Convention on Human Rights. One of the many initiatives to spring up in the immediate aftermath of World War II with the aim of realising the vision of “Never Again”, the enormous impact of the Convention is sometimes overlooked in comparison with the more widely known UN Universal Declaration of Human Rights.

Nonetheless, Ireland was among the states that gathered in Rome on November 4th, 1950 to affirm their “profound belief in those fundamental freedoms which are the foundation of justice and peace in the world”. Importantly, the states also committed to the establishment of a European Court of Human Rights, which now allows individual citizens across Europe to take national governments to court to vindicate those fundamental freedoms guaranteed by the Convention.

Seventy years on, the ECHR has been ratified by all 47 countries that make up the Council of Europe, with the Vatican City and Belarus the only parts of the continent to which its jurisdiction does not yet extend. The Convention has been a force for the defence of human rights across Europe, most notably by establishing a framework for reintegrating the former Soviet states into the European home after the fall of the Berlin Wall. In Ireland, the judgments passed down by the court have been key to our evolution into a more accepting and progressive country, exemplified by the two historic referenda that reshaped Irish social norms this decade.

It was the European Court of Human Rights which, in the case taken by David Norris challenging the law criminalising homosexual conduct, found that the right to respect for private and family life laid down in Article 8 of the ECHR ensured that public disapproval of “immoral” behaviour was not a basis for preventing consenting adults from enjoying a private life. Decriminalisation of male homosexual acts followed in 1993.

The significance of that shift from a model based on (perceived) morality to one based on consent and personal freedom cannot be overestimated, and its impact reverberated through the social revolution of the 1990s and 2000s in Ireland. Its echo can be seen in the “Sinead’s Hand” advertisement in the lead-up to the Equal Marriage referendum in which a young man knocks on every door in Ireland asking permission to marry his fiancée, highlighting the inherent injustice of involving the general public in the personal question of who can marry.

The ECHR also played a pivotal role in another dramatic social change of recent years: the transformation of Irish views, and eventually Irish law, regarding abortion rights. A case brought against Ireland by Open Door and Dublin Well Woman in 1988 found that preventing access to information about abortion services available abroad breached the right to freedom of expression and information. The public pressure from the X Case impelled the then-government to act on this judgment, eventually rectifying the violation through the constitutional amendments of 1992.

Later, the case brought by A, B and C laid bare the consequences of the failure to implement properly the right to a lawful abortion in Ireland in the eighteen years between the X Case and the European Court judgment in 2010. The court found that the right of Ms C to private and family life had been violated. The case, soon followed by the tragic death of Savita Halappanavar, made it clear that the status quo was untenable.

The judgments of the Court have often shone a light on the uncomfortable parts of our history. Nonetheless, it is to our credit that the social changes which have been spurred on by judgments of the European Court of Human Rights have been consistently supported by most Irish people. The judgments of the Court also show how broad-based is its remit in vindicating rights across a range of human activity. They have in turn inspired the Convention system to better protect and promote the human rights of vulnerable groups those with disabilities, refugees, and victims of domestic violence and violence against women.

My hope is that this process will be completed in the near future, leading to the development of a stronger and more coherent framework of human rights protection throughout Europe. In the meantime, I as the EU Special Representative for Human Rights will continue to work closely with the Council of Europe.

Eamon Gilmore is the EU Special Representative for Human Rights