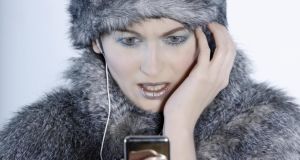 ‘That “Serial” has spilled all over social media is at one and at the same time a testament to the show’s journalistic brilliance and a salutary reminder of the bizarre nature of fandom.’ Photograph: Getty Images

Have you got your “Team Adnan” badge yet? Go to zazzle.com and pick one up for just $4. You can wear it on your “Mail Kimp” T-shirt also available from zazzle priced $29.95. There are also “Serial” stickers and hats for sale. If you don’t know what these products refer to then you’re one of the last few humans not to have got sucked into the vortex of the “Serial” podcast.

Such has been the cultural ubiquity of the weekly murder mystery podcast (which ended its 12-week run on last Thursday, December 18th) that the show has crossed over into the weird world of fandom. You know this fandom has got a little out of hand when you come across a tweet from the official Sesame Street official account showing the popular character “Bart” asking “Is it Thursday yet?” – Thursday being the day each new episode of “Serial” became available during its run.

There is something incongruous about a popular children’s character apparently endorsing a show that is all about the real life murder of a young woman called Hae Min Lee who was horrifically strangled to death in 1999. The “Serial” podcast has been re-examining the case and wondering if her ex-boyfriend, Adnan Syed (from the questionable “Team Adnan” badge above) was wrongly convicted of Lee’s murder. Syed is currently serving life for the crime. He has continually protested his innocence.

There’s quite a lot of ground to cover with the murder and investigation and every aspect is looked at in detail during the podcast. Of particular importance to the case is a Best Buy retail shop in Baltimore and whether or not there was a pay phone there at the time the murder was committed.

“Serial Fans Are Flocking To The Best Buy At Center Of Murder” ran the headline over a story on the Huffington Post two weeks ago. “It’s hard to tell whether the Best Buy brand in general has gotten any lift from “Serial” . . . Listeners are certainly hearing the name more, given how frequently it is mentioned on the show” runs a sentence in the article. Later in the article we read “Even though the show (“Serial”) links the Best Buy parking lot to a grisly crime, it may actually boost sales by bringing more fans to the store, said Jeff Greenfield, the co-founder of media analytics firm C3 Metrics”. Jeff Greenfield is quoted as saying “Any mention of them (Best Buy), especially at this time of year, is going to be to their advantage”.

Best Buy got itself into a lot of trouble when it tweeted two weeks ago: “We have everything you need. Unless you need a payphone. #Serial”. Following accusations that were tawdrily exploiting a real life murder, it subsequently deleted the tweet saying “it lacked good judgement”. You think?

Fans of the show who have turned amateur sleuths have also been visiting other areas in the Baltimore area which are connected with the murder. YouTube videos show us the spot in the park where Hae Min Lee’s body was found buried in a shallow grave. If you look up “Serial Podcast Locations” you can get a map which has the “approximate locations” of the family home of the murdered young woman, Adnan Syed and other key characters from the show.

That “Serial” has spilled all over social media is at one and at the same time a testament to the show’s journalistic brilliance and a salutary reminder of the bizarre nature of fandom. To get this in one you only need head over to YouTube and look for a video called “My drunk wife listens to Serial podcast” – the narration begins with the unforgettable line “My wife has been drinking since noon and listening to Serial”.

There has even been the ultimate accolade: a Hitler Downfall parody video made of the show.

Where things can take a sinister turn is on the Reddit social networking forum dedicated to the show. If you came in late on “Serial” – or passed altogether – you need to know that there are certain other potential suspects for Hae Min Lee’s murder.

In an interview with Jake White, who is one of the Reddit’s moderators on the Serial page, White talks about some of the “obsessive users” of the page. “I absolutely have a problem with the people who are out there looking for these people’s houses and trying to find (certain individuals connected with the case) on Facebook – it is offensive and inappropriate”.

All forms of libellous accusations to do with the crime and who people think the “real” murderer is have had to be removed from the internet. That is par for the course for the social media times we live in but this isn’t a TV programme such as “Lost” where people could (and did) write freely about fictional characters. Hae Min Lee’s family have to cope with all of the sometimes cruel and exploitative talk and postings about their daughter’s murder.

The danger of all this online activity was pulled into sharp focus two weeks ago when it was announced that the man serving life for Hae Min Lee’s murder – Adnan Syed – will go before the Maryland appeals court next month (January) to ask for post-conviction relief. This is not an appeal against the murder but as Syed’s lawyer says “it’s his last best chance of freedom”.

For those intent on following how Syed gets on at the Maryland appeals court, you should possibly consider purchasing a special “Serial” notebook. It’s a “5 x 7 lined journal with the “Serial” logo debossed on turned edge red leatherette cover” and is on sale for a mere $15 at the “This American Life” (the producers of “Serial”) homepage.