Engineering as well as science plays critical role in universities

While science is about discovery engineering is about innovation 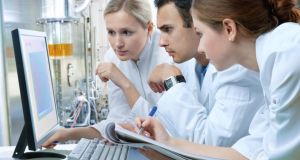 ‘A study by the Irish Academy of Engineering in 2011 noted that in the previous five years, only 8 per cent of the total Government’s funding for research was allocated to engineering, whereas some 85 per cent went to the sciences.’ Photograph: Getty Images

The Irish university science academics are worried with the recent changes in the Government’s policy for funding research. In a letter to The Irish Times (March 18th) they wrote of the Government’s short-sighted drive for applied research which has a potential for industrial innovation, saying that these changes created the perfect storm for basic scientific research, undermining their ability to carry out world-class research.

However, they also wrote of their support for a national strategy for a well-balanced mix between basic and applied research, which is surely what these national funding changes will bring about but which was absent and sorely needed in our university research activity in recent years.

The establishment of the Science Foundation Ireland in the SFI Act of 2003, referred exclusively in its functions to the promotion and development of basic research, thereby excluding applied research, which generally describes the research that is carried out in the university faculties of engineering.

It thus gave rise to a major increase in the university research activities in the scientific disciplines of chemistry, physics, biology, zoology, biochemistry, mathematics, botany, and pharmacology, where the research is generally of a basic nature. The result was that in the years following the Act, scientific research in Irish universities expanded greatly, obtaining widespread respect in the international scientific communities, as was described by Dr David McConnell (Opinion, April 2nd).

Engineering researchers, however, understandably played a very poor second fiddle since 2003 to the basic research of their scientific colleagues in the Irish universities. Although the research was unquestionably of a high international standard, because of its low funding by the State, it had a much lower activity across campuses.

The academic backdrop to this debate on research funding is the larger question of the role of research in the university. Perhaps not all will agree, but the prime role of a university is education, in teaching and graduating the youth of our country, where research is an adjunct to that activity, an important adjunct to be sure, but an adjunct only primarily because of its input to teaching. Research also has an important role in its contribution to the university’s international rankings.

Finally, all our Irish universities promote and financially support the creation of industrial start-up companies by their research students and staff across all disciplines, and these are having a major input into the country’s economic development. UCD Nova, for example, has assisted in the establishment of some 60 companies in the past 10 years.

The other Irish universities have similar data. This activity is part of a wider emerging ethos in universities whereby there is greater contact by staff and students with the world outside. Not only is the prime teaching function of the university not interfered with by this activity, it engenders a more stimulating educational ambiance for our students, embracing greater relevance to their future careers. John Kelly is Professor Emeritus, and former Registrar, UCD, Fellow of the Irish Academy of Engineering and Founder editor of international journal, Industry & Higher Education.

1 Restarting Ireland: When and how will we ‘get back to normal’?
2 Covid-19 testing: Irish pharma firms source raw material to make reagent
3 Mary Lou McDonald: This crisis shows that Sinn Féin was right
4 Coronavirus lockdown steps could remain into winter, says expert
5 Coronavirus: Trump warns of ‘a lot of death’ in United States next week
Real news has value SUBSCRIBE