The Irish Times view on violence in Northern Ireland: a time to show leadership 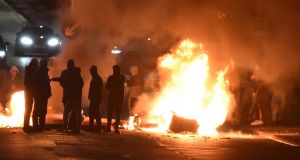 Fires burn in Carrickfergus in the early hours of Tuesday Morning after a night of disturbances across Northern Ireland. Photograph: Pacemaker

A grimly familiar scene has been playing out over the past few nights in parts of Northern Ireland, where young people have been involved in serious violence against the police. Some 41 officers from the Police Service of Northern Ireland (PSNI) suffered injuries after being hit with petrol bombs, bins and stones in predominantly loyalist parts of Belfast and Derry over the Easter weekend. Children as young as 12 have been involved, police said.

While the authorities believe the unrest was orchestrated, the motivations of the rioters appear to be an inchoate mix of criminal aggression and political grievance, their anger stoked by the manipulations of drug gangs and a climate of instability, all underlaid by decades of community neglect. Those directing the violence – the PSNI believes some of the disturbances are related to its recent successes against loyalist criminals – hang back in the shadows like the cowards they are.

Brexit has destabilised Northern politics. Many unionists feel betrayed over the Northern Ireland protocol, and the sense that old constitutional certainties are up for discussion has unsettled them further. Most right-thinking people were appalled by republican behaviour at the funeral of IRA leader Bobby Storey last June – and felt disillusioned by the decision of the public prosecutor last week not to take further action against Sinn Féin politicians who attended the event.

However, none of these facts excuse the abject failure of many unionist and loyalist leaders to take responsibility and show the leadership this difficult moment demands. It is striking that the Loyalist Communities Council, an umbrella group that recently announced the withdrawal of loyalist support for the Belfast Agreement, has not said a word about the violence of recent days. An article in the News Letter by its chair David Campbell yesterday, while stating that opposition to the protocol would be peaceful and democratic, was devoted entirely to blaming the Irish Government for “imposing” that EU-UK deal. The council, like the DUP itself, decries the protocol while failing to acknowledge that it was the result of the DUP overplaying its hand at Westminster by vetoing every realistic alternative.

The late David Ervine was always attuned to the ways in which mainstream unionist leaders would whip up loyalist anger for political purposes only to discard those communities when they were no longer useful. The decline of loyalist parties and the continuing failure to invest in those working-class neighbourhoods has made the situation worse and means that for many the “peace dividend” is nowhere to be seen. Blaming London or Dublin for everything, framing daily politics as a sectarian zero-sum game, reverting instinctively to the language of fear and betrayal – all of these things have consequences. We’re seeing that play out on the streets.