The Irish Times view on the Dáil voting controversy: an own goal 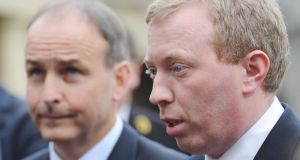 Ceann Comhairle Seán Ó Fearghaíl was correct to say the controversy over voting procedures in the Dáil has “further eroded confidence in how our national parliament conducts its business”. There is now an onus on the Dáil to tighten its procedures and devise a workable set of sanctions for TDs who fail to live up to their responsibilities.

An inquiry by clerk of the Dáil Peter Finnegan into the incident last week when Fianna Fáil TD Niall Collins voted six times for party colleague Timmy Dooley, who was absent from the chamber, has concluded that it would not be legally appropriate to recommend sanctions in the case so as not to prejudice the work of the Dáil ethics committee which is also investigating.

No doubt Ó Fearghaíl felt equally circumscribed when he described the facts as set out in Finnegan’s report as “stark and unpalatable”. In truth, the explanations provided by Dooley and Collins stretched credulity to the limit. And despite Micheál Martin’s removal of both from his frontbench, Fianna Fáil is the primary loser. Rightly so, but it is not alone. The petty party-political point-scoring which has developed around the issue over the past week has tainted politicians more broadly.

Members of Dáil Éireann, by and large, are hard-working and responsible. They do a difficult job which is often unappreciated by the public who are prone to thinking the worst of them. That is why the shenanigans over the voting system are a serious matter. Cynicism about politics is all too pervasive and the latest controversy encourages lazy assumptions which serve to undermine the health of our democratic system.

The Ceann Comhairle should not have to remind TDs of their responsibilities as members of an institution that is a cornerstone of our democracy. That status places a fundamental duty on them to behave in a proper manner and avoid comment or actions that undermine parliament and how it is perceived. A transparent voting system and real sanctions for those who transgress are urgently required.