The Irish Times view on the coronavirus: State must get ahead of crisis 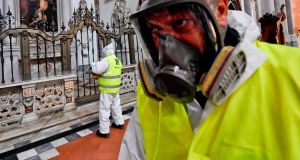 Operators of the ‘Napoli Servizi’ city services fumigate the Church of San Domenico Maggiore in Naples to counteract the danger of a contagion from the coronavirus. According to official figures the number of Coronavirus cases in Italy, the centre of Europe’s Covid-19 outbreak, was at 3,858 cases by Friday, with a death toll of 148 people. Photograph: Ciro Fusco/EPA

As community spread of the novel coronavirus begins in the Republic, we can expect the numbers of people infected to rise. How steep this curve becomes will depend on a number of factors: the continued effectiveness of contact tracing; how well each of us executes public health advice around hand washing and respiratory hygiene; and as we move to a mitigation phase of the epidemic, how informal networks of family and community care can support an under-siege health service.

Extensive modelling suggests the worst case scenario is that 80 per cent of the population will become infected. In reality the proportion of the population affected will likely be a lot lower than that; most people will have mild symptoms and recover rapidly. The fatality rate appears to be changing for the better as the epidemic spreads globally, with one per cent now seen as an overall death rate. Inevitably, mortality will be higher among those with pre-existing health conditions. These patients will require the most intense and prolonged care in hospitals and the health servicce will be greatly challenged in meeting their collective needs.

Public health officials have stepped up to the challenge posed by the virus, with regular, reliable briefings to the public, although an excess of caution in releasing quite general information about infections has had the effect of pushing people towards information sources where myth and rumour also flourish.

As we move to the next phase of the epidemic, we are likely to see a surge in Covid-19 cases. Taking into account the infectiveness of the new bug and its ease of transmission, expert opinion suggests we will see a particular surge of cases over a three-week period. About 50 per cent of infections will occur in a three-week concentrated burst, while 90 per cent of infections will occur over a nine week period. This means the brunt of the epidemic will be felt during spring and early summer. As this phase approaches it is incumbent on government to put broader strategies in place. Asking people to self-isolate without an income for 14 days risks people with symptoms not coming forward. A minimum payment for employees and the self-employed for a two-week period should be introduced.

Stigmatisation, racism and any form of scapegoating of individuals who become infected is unacceptable and must be guarded against.

And we must play our part in the international response to the epidemic. The WHO has warned that supplies of face-masks were “rapidly depleting” due to hoarding and misuse. We must encourage an EU-wide sharing of personal protective equipment. Above all, the State must get ahead of the crisis. Postponing St Patrick’s Day gatherings would also send a valuable signal that Ireland takes its responsibilities seriously.