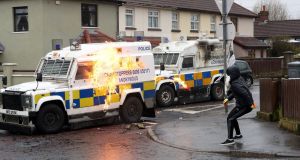 The outbreak of violence in Derry on Easter Monday during an illegal dissident republican parade is a sinister development that should concentrate the minds of the major political parties in the North. Photograph: Niall Carson/PA Wire

The outbreak of violence in Derry on Easter Monday during an illegal dissident republican parade is a sinister development that should concentrate the minds of the major political parties in the North.

While the numbers involved in throwing petrol bombs and stones at the police was relatively small, those behind the outbreak are clearly trying to drag the North back into a cycle of violence that all decent people had hoped would never happen again after the Belfast Agreement.

The unambiguous condemnation of the violence by Sinn Féin’s leader in the North, Michelle O’Neill, was welcome. Her response was important because the speech delivered at city cemetery in Derry by dissident republican Stephen Murney was chilling. “If Brexit can weaken and damage the union, then as republican revolutionaries it is our duty to take advantage of it,” he told a crowd of about 200 people.

The speech and the violence that accompanied it should serve as a wake-up call to the Democratic Unionist Party (DUP) and Sinn Féin. Both parties have a duty to find a way of restoring the institutions established under the Belfast Agreement that have brought 20 years of relative peace to Northern Ireland. The Irish and British governments too have a responsibility to handle the Brexit negotiations in a way that does not inflame passions on either side of the community divide and give succour to the tiny minority who are intent on using violence to further their ends.

There was food for thought in an interview in this newspaper with Billy Hutchinson, leader of the small Progressive Unionist Party, who was involved in the negotiations that led to the Belfast Agreement. There is clearly some validity in his view that the North has not moved on over the past 20 years and has actually gone backwards.

Nonetheless, he remains optimistic that if the two big parties can put their differences aside and develop a sense of shared responsibility there is still a chance that all of the hopes invested in the Belfast Agreement 20 yeas ago can be realised. Let’s hope he is right.

1 Harry and Meghan will no longer be working members of British royal family
2 Chris Hadfield on the climate crisis: ‘The world has seen much, much worse’
3 Netflix: The best 101 films to watch right now
4 Mary Lou has to call for the smelling salts as SF councillor deals a knock-out blow
5 Dublin gangland figures involved in Drogheda feud that killed 17-year-old
Real news has value SUBSCRIBE