With mixed messages and unnecessary red lines, Trump has made a volatile situation even more perilous 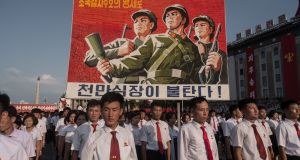 A propaganda poster is displayed during a rally in support of North Korea’s stance against the US, on Kim Il-Sung square in Pyongyang on Wednesday. Photograph: Kim Won-Jin/AFP/Getty Images

Actions speak louder than words. But in international diplomacy, not least in the delicate dialogue between nuclear adversaries, words are actions too. So Donald Trump’s bellicose response to North Korea’s latest provocation is the most serious escalation for many years in the tense, decades-old stand-off between Washington and Pyongyang.

On a break from the golf course, Trump warned the regime of Kim Jong Un that any more threats to the United States would be met with “fire and fury like the world has never seen”. The line echoed Harry Truman’s warning, as the US dropped a nuclear bomb on Hiroshima in 1945, that unless the Japanese surrendered they would face a “rain of ruin... the like of which has never been seen on this earth”. Yet Trump’s bluster owes just as much to the linguistic influence of the 33-year-old North Korean dictator, perhaps the only world leader more bombastic and erratic than the US president himself.

Trump’s intervention will concern US allies and alarm the millions of civilians who would find themselves in the front line of a catastrophic war on the Korean peninsula. Worst of all, it is strategically self-defeating. As Trump’s postwar predecessors all learned, there are no good options in dealing with the cruel dictatorship of the Kim dynasty. Efforts to prevent Pyongyang from developing a nuclear capability failed. It has successfully built medium-range missiles that could devastate cities in South Korea and Japan, recently launched a rocket believed to put the western United States within its range and, if reports from the US this week are to be believed, has figured out how to miniaturise a nuclear warhead.

Even before Pyongyang went nuclear, a preventive attack of the type hinted at by Trump carried enormous risks. Today, even the most surgical strikes against North Korean installations could provoke the regime into a response that could obliterate Seoul, a metropolitan area of more than 25 million people, and put Tokyo and Los Angeles at risk. Kim knows this, but he also knows that he is similarly constrained. Pyongyang does not pose an existential threat to the US in the way that the Soviet Union did, and the regime is aware that if it does attempt to launch a nuclear attack, it will be signing its own death warrant. That has produced the current, uneasy stalemate.

The Western approach to North Korea has alternated between threats and inducements, but recently it has made important progress through diplomatic channels. Just last Saturday, the UN Security Council unanimously imposed new sanctions on North Korea, and there are signs of growing Chinese impatience with its belligerent neighbour. Now, by sending mixed messages and drawing unnecessary red lines he may be obliged to act on, Trump has made a volatile situation even more perilous.