Hungary: a threat the EU must confront

Across central and eastern Europe, systemic problems pose grave threats to the European Union and the western liberal order 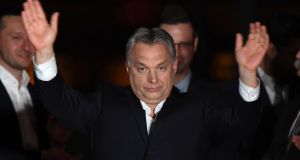 Hungarian Prime Minister Viktor Orbán celebrates on a podium on the bank of the Danube River after winning the parliamentary election with members of his Fidesz party on Sunday. Photograph: Attila Kisbenedek/AFP/Getty Images

Viktor Orban’s landslide election win, a victory built on xenophobia, intolerance and preposterous conspiracy theories, underlines the alarming authoritarian drift in Hungary and the challenge the European Union faces in confronting it.

Orban, an illiberal demagogue, will return for a third consecutive term as prime minister with his power enhanced. Having won 49 per cent of the vote, his Fidesz party will have 133 of the 199 seats in parliament – a supermajority that will allow the government to change Hungary’s constitution. Orban says his priority is preventing refugees and other migrants being resettled in Hungary under a plan he claims was devised by the liberal philanthropist George Soros. Fidesz officials say their deputies will soon push ahead with a controversial “Stop Soros” Bill that could result in non-governmental groups that “support migration” being banned on national security grounds.

Under Orban, the space for independent debate has contracted significantly. That was underlined by election monitors from the Organisation for Security and Co-operation in Europe, who reported media bias, opaque campaign financing and “pervasive overlap between state and ruling party resources, undermining contestants’ ability to compete on an equal basis”. Predictably, the result was celebrated by right-wing populists elsewhere on the continent.

The greatest threat to the EU comes from Hungary, where the government has been systematically dismantling democratic institutions – independent courts, the free press and organisations that hold government to account

Across central and eastern Europe, systemic problems pose grave threats to the European Union and the western liberal order generally. The Polish government is being investigated by the EU for undermining the rule of law. The killing of an investigative journalist in Slovakia has highlighted the dangers posed by organised criminals there. The same goes for Bulgaria. In the Czech Republic, the prime minister – a billionaire media mogul – is under investigation for alleged fraud. In many capitals, governments feel growing affinity for Russia under Vladimir Putin.

But the greatest threat to the EU comes from Hungary, where the government has been systematically dismantling democratic institutions – independent courts, the free press and organisations that hold government to account. Stymied both by rules that require unanimity before sanctioning a member state and by a certain reluctance to isolate a neighbour (and risk pushing it farther away), the EU has so far struggled to come up with a coherent response to the drift in Budapest. Indeed, Fidesz is given added protection by its membership of the European People’s Party, the largest group in the European Parliament.

If the EU is serious about its claim to be a community of values, and if it is to deter others in what is increasingly looking like an authoritarian bloc in its midst, it must demonstrate that eroding democratic norms will come with a heavy price.