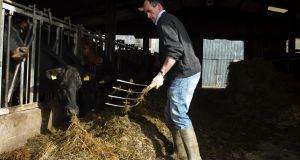 Pat Murray of Knocknagapple, Monaseed, Co Wexford is one of many farmers nationwide who are experiencing a fodder crisis and finding it difficult to feed their livestock. Photograph: Garry O’Neill

For most people at the frontline of Irish farming, it has been the worst of times – a horrible “seven-month winter” with little sign that the warming temperatures of a late spring are imminent. They have been subjected to a combination of storms, high rainfall and low temperatures. Inevitably, it has led to fodder shortages.

Recent heavy rainfall, water-logged land and lack of grass growth due to cold temperatures have compounded difficulties as farmers desperately seek supplies of dried hay, silage or other feed. They have had to keep livestock indoors far longer than usual – for some, supplies are down to a matter of days. A problem that was most pronounced in the west and north now impacts on almost every corner of Ireland. The crisis has worsened in recent days, so much so that “there is insufficient fodder of the necessary quality in the country to resolve the feed shortage”, according to the Irish Farmers’ Association (IFA).

The vagaries of weather aside, the Government’s response has been inadequate. Minister for Agriculture Michael Creed told the Dáil last week that fodder was a matter for each individual farmer but he was monitoring the situation. The IFA, with justification, declared the response “simply not good enough”, as shortages had persisted for months and now warranted an emergency response. The toll in terms of deterioration in animal welfare and stress on farmers and their families was all too evident.

There has been an over-reliance on hope that the weather will pick up and solve the problem, while measures to alleviate what has become a crisis have lacked co-ordination, and in some instances were overly bureaucratic. Meetings over the past week between Department of Agriculture officials, the farm advisory body Teagasc and major co-ops offer the prospect of a more co-ordinated and extensive response, including importation of feed and practical steps to ease the plight of farmers. The depth of the problem is such that a series of well-targeted actions and supports are necessary and must remain in place for months to come.