Donald Clarke: This atheist dogma is beyond belief

Sure, the Rising was undemocratic and religious. As an atheist, I have no problem with that 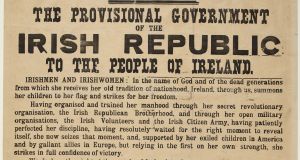 ‘The Dublin commemorations of the Easter Rising (not the ‘April Rising’) offered a considerably more cheering celebration of nationhood than the boozed-up, big-green-hat debauchery on March 17th, which also falls on a Christian holiday.’

My leaders have, it seems, come out against last weekend’s Easter Rising commemorations. A report in this newspaper explained that “atheist leaders” – in the collective form of Atheist Ireland – had refused an invitation to be part of the epic bash .

“The 1916 Rising involved an undemocratic group killing innocent people, based on a Proclamation whose authors claimed that Ireland was acting through them in the name of God,” Michael Nugent, chairman of Atheist Ireland, commented. “The reason for using the wrong date is to make the commemorations coincide with the Christian holiday of Easter.”

I would cast my eyes to heaven if I believed such a place existed.

You need only look at the news reports on British TV stations to confirm that the organisers got the tone largely correct. The stories observed a mature nation tastefully celebrating its own origin story. There was a martial presence, but we didn’t hear much rattling of sabres. Indeed, the Dublin commemorations offered a considerably more cheering celebration of nationhood than the boozed-up, big-green-hat debauchery on March 17th (which Atheist Ireland would presumably also fail to acknowledge as it falls on another “Christian holiday”). Nugent and his team could hardly have seemed more out of touch if they’d sought to ban Christmas (see previous parentheses).

The second part of Atheist Ireland’s argument is hopelessly shaky. The Government is not “mak[ing] the commemorations coincide with the Christian holiday of Easter”. The Rising has always been commemorated at Easter, rather than on the date it actually began. It was inconsiderate of the rebels to take up arms on a moveable feast, but the notion of celebrating the “Easter Rising” at any time other than Easter would be plain ludicrous. It is never known as the “April Rising”. We may not believe the Nazarene cheated death, but we can’t deny that Easter happens. That’s when the shops stop selling Creme Eggs.

It is true that the rebellion was not “democratic”. Few rebel movements have the infrastructure to organise a national plebiscite before taking up arms. No popular votes took place in colonial America or Bourbon France before their respective revolutions. Both those disturbances resulted in the death of innocent people. We trust, therefore, that Atheist Ireland will stay away from the American and French embassies on, respectively, the 4th and 14th of July.

There is, of course, a pacifist argument to be made here, but Atheist Ireland does not declare itself to be a pacifist body.

The only part of the argument that comes close to passing the stress test is the section about the rebels acting “in the name of God”. As Eamonn McCann noted last year, the Rosary was recited in the GPO. On the other hand, there were avowed Marxists at the barricades and some bishops (though not many) did condemn the Rising from the pulpit. No massed activity in Ireland during that era could entirely avoid the tendrils of religion.

I have, previously in this place, sided with Jonathan Miller, the distinguished physician and theatre director, when addressing the question. “I’m reluctant to use the word ‘atheist’ to describe my own unshakable disbelief,” he said. “After all, we don’t have a special word for people who don’t believe in ghosts or witches.” My “atheism” is as important to me as my unconcern about giant sea monsters.

Forming atheist clubs or attending atheist meetings only encourages the aggressively Christian in their monstrously empty-headed opinion that atheism is a religion. If atheism qualifies even as a “belief system” then stones, hats, binoculars and all other inanimate objects subscribe to that system. None of those things believes in God either. The non-community of atheists really is an absurdly broad . . . well, not church, obviously, but you get the idea.

None of which is to suggest that the campaign against religious domination of Irish schools or Catholic doctrine in health practice should not be fervently redoubled. These remnants of Bronze Age superstition are an outrage. One does not, however, need to be an atheist to resist such things. Maybe Atheist Ireland could mutate into Secularist Ireland. The name doesn’t seem to have been taken.