Dogs will feast on the putrid, fly-blown corpses of backbench deputies forced to ‘go over the top’ in another tragic election 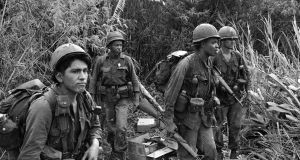 Political correspondents come back from their long-range patrols of the Kildare Street jungle with thousand-yard stares and wearing necklaces made of ears – the ears of the nameless politicians who confide in them. They know where this is going.

The present stalemate in Leinster House has a grim historical precedent.

From September 1939 to June 1940 the armies of western Europe faced each other across the Maginot Line on the French-German border.

We remember this period now as the “Phoney War”, a doomed interlude during which the people of Europe still believed there was time for a negotiated settlement before the world was plunged into another bloodbath.

All wars must end. Even the phoney ones.

And if our current brigade of TDs think they can hide in their foxholes and wait for a magic bullet to deliver a new government without bloody sacrifice on their part, they have another thing coming.

Leinster House is now a powder keg. Fine Gael’s foot soldiers, bruised and bloodied, look at Enda and think of King Pyrrhus of Epirus, who defeated the Romans at Heraclea but lost so many troops that he could not fight on – the original Pyrrhic victory. Many within the Tribe of Gaels would like to replace their ill-starred warlord with one possessing Napoleon’s favourite quality in a general – luck.

On the other side of the front line of politics, there is unrest within the ranks of the Soldiers of Destiny at the thought of supporting a Fine Gael minority government.

True, such an arrangement would accord with the ancient wisdom of General Sun Tzu, who noted that “the good fighters of old first put themselves beyond the possibility of defeat, and then waited for an opportunity of defeating the enemy”.

The spoils of war

In this febrile atmosphere of fear and mutiny, both Enda and Micheál are seeking to enlist mercenaries to guard their positions against friend and foe alike.

The hulk of the Labour Party, still burning on the battlefield, might yet be salvaged and put to use by one side or the other other. The rabble of Independents – many of them new and untested in battle – must likewise take sides or be picked off one by one.

Because it all comes down to numbers. As Erwin Rommel, the Desert Fox, remarked, “in a man-to-man fight, the winner is he who has one more round in his magazine”.

In this case, Enda needs up to nine more Dáil seats in his magazine – half the magazine capacity of an original Vietnam-era M16 assault rifle, assuming you do as the short-timers did and only load 18 bullets instead of the maximum 20, to protect the magazine spring and prevent jamming in combat. Which none of us wants.

The dogs in the street

Hell, even the dogs in the street know what’s going to happen if a deal is not reached soon: those same dogs will feast on the putrid, fly-blown corpses of backbench deputies forced to “go over the top” in another tragic election, lions led by donkeys, theirs not to reason why.

So, while Enda and Micheál squint at each other like Clint Eastwood and Lee Van Cleef at the end of the civil war epic The Good, the Bad and the Ugly (Joan Burton is Eli Wallach, the only actual Mexican in the stand-off, who wrongly thinks he still has bullets in his gun) a great deal of work is quietly being done to prevent another electoral slaughter.

As with a diplomatic duck, all the paddling is going on beneath the surface.

Yet ducks have no place in combat, no matter how flooded the trenches in which your TDs await the order to attack.

Time is running out. It is now more than seven weeks since the general election, and seven weeks is a long time in politics.

As long as six weeks

We held the coastline.

They held the highlands.

And we will all go down together.

Micheál and Enda need to understand that this game is for keeps and they are playing senior hurling now. Please excuse that last metaphor – they used to teach us at journalism school never to use overwrought sporting imagery when writing about politics.

1 Covid-19 incidence in the Republic set to surpass that of UK
2 Coronavirus: Non-essential travel from US set to be banned within days
3 Irish in Australia: ‘We are in for a few hard years’
4 ‘Our hearts are broken’ – implications of fresh lockdown sink in
5 Meet the Bearman of Buncrana: ‘I knew about Joe Exotic for years’
Real news has value SUBSCRIBE