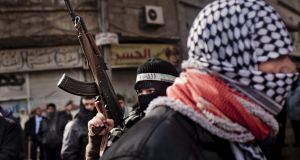 Members of the Free Syrian Army. Cameron believes there are 70,000 pairs of suitable Syrian boots on the ground. Robert Fisk reckons 70 might be nearer the mark. Photo: Tomas Munita/The New York Times

David Cameron was following patriotic precedent in backing Turkey against Russia following the downing of a Russian aircraft on the Turkish-Syrian border.

“We don’t want to fight but by jingo if we do/We’ve got the ships, we’ve got the men, we’ve got the money too/We’ve fought the Bear before, and while there’s Britons true/The Russians shall not have Constantinople.”

The song was written in 1878 by Gilbert H MacDermott, son of Irish migrants, bricklayer Patrick Farrell and laundress Mary McDermott. It referred to the Disraeli government’s bullish support for the Ottoman empire to thwart Russian expansion into the Balkans. The Ottoman empire was to fragment following the allied victory in the first World War. Cue British official Sir Mark Sykes and French diplomat François Georges-Picot to draw lines on a map to create Iraq and Syria.

The Sykes-Picot Line was erased last year by Islamic State’s declaration of its caliphate. It is unlikely that either country will survive as a single entity. All that history undone, so little learned.

On the same day, September 15th, the National Transitional Council announced its fighters had entered the last Gadafy holdout, Sirte. The strategy of Western bombs and local boots on the ground, had prevailed. Last weekend, the Wall Street Journal reported that Sirte, population 70,000, is now in the hands of Islamic State (also known as Isis). Islamic State had about 200 fighters in the Sirte area a year ago: now, says the journal, it has 5,000, including administrators and financiers, and has appealed for jihadi-minded technicians and engineers to come help them reopen oil fields and refineries.

“In recent weeks, a flood of foreign recruits and their families have arrived in Sirte . . . Islamic State has called on recruits to travel to Libya instead of trying to enter Syria, while commanders have repatriated Libyan fighters from Syria and Iraq . . . Morality police patrol in vehicles marked with Islamic State’s logo and courts administering Islamic law, or shariah, as well as prisons have been set up.”

The journal has reported that Islamic State intends to move its capital to Sirte if Raqqa in Syria falls before the planned coalition onslaught. Also last week in Libya, the US launched its first air strike on Islamic State outside Syria and Iraq.

Cameron believes there are 70,000 pairs of suitable Syrian boots on the ground to advance and hold territory softened up by British and other bombs. Challenged on this figure – Robert Fisk reckons 70 might be nearer the mark – Cameron explained it had been based on “advice”. Intelligence, that is. You have to wonder if he checked with Jonathan Powell, who knows more than almost anybody about the use of intelligence in planning for war. Powell has been touring the television studios giving of his expertise on war and terrorism, looking every inch the elder statesman, and treated with remarkable respect considering he was Downing Street chief of staff when Tony Blair was planning the invasion of Iraq.

Evidence to the inquiry under Sir John Chilcot was that the Joint Intelligence Committee – MI5, MI6, CCHQ and military intelligence – had originally assessed Saddam Hussein would use chemical and/or biological weapons if he believed his regime was under imminent threat of destruction. This fell far short of a half-credible casus belli. Powell pummelled intelligence committee chairman John Scarlett with emails asking for a more useful interpretation.

“It backs up the . . . argument that there is no CBW threat and we will only create one if we attack him. I think you should redraft the para.” You are saying that our plan to attack would make the situation worse. We need you to tell us the opposite. And it was done. (Scarlett was later knighted and promoted to head of MI6.)

On September 24th, Blair told a hushed Commons the committee had reported to him in unambiguous terms that Saddam had the capacity to attack the West with chemical and biological weapons and was ready to do so. A spooked Commons voted for war. It’s happening again, not that it ever stopped, the greed-crazed scramble for whatever share of the wealth of the region and influence in the world will fall to those who made war to win it. Same as back in MacDermott’s day.