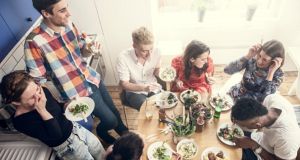 Millennials, the demographic cohort which loosely contains those born between the early 1980s and the early 2000s, are easily stereotyped. We are all familiar with at this point with the depiction of them as frozen in a state of arrested development: dependent on the emotional and financial support of their parents, who they still live with because they are either lazy, entitled, self-obsessed or a combination of all three.

Complaining about young adults is a tradition passed on from generation to generation. But there is evidence that Ireland’s economic boom-bust-boom cycle of the last 20 years may have had a particularly strong impact on the latest generation of young adults.

Research conducted by KBC Bank found that, despite having come of age during a period of increasing economic uncertainty, millennials generally hold more positive views on both the economy and their personal finances than people over the age of 35 do. They also bounced back – in terms of sentiment – from the crash more rapidly than their older peers, although this has to be viewed in the context that many of them also left Ireland during the crash.

These findings seem to support the narrative that the young have never had it so good, what with supposed constant access to the bank of mom and dad and a higher level of education, heavily subsidised by the Government (or mom and dad), which (in principle) promises higher average earnings.

However, a closer look suggests that the apparent optimism of youth is more properly described in terms of the increasing pessimism that comes with ageing in Ireland.

Younger people have plenty of reasons to be more downbeat than their older peers. Data from Eurostat – the European Union statistical agency – suggests they earn, and will continue to earn, less than their predecessors.

If we focus on the post-crisis period, 18-24-year-olds saw a decrease in their median net income of about 10 per cent between 2009 and 2017. In contrast, all other age groups saw an increase in earnings.

While these age groups do not match up exactly with millennials, Generation X, and baby boomers, they indicate diverging income trends across age groups that weigh unfavourably on younger age groups.

Additionally, as younger adults consider transitioning to a more “settled” phase of life, they are entering a housing market where affordability constraints mean younger adults remain either in the rental market (where private rents have increased nearly 50 per cent since 2003) or in their family home.

So why aren’t the young much more miserable about the outlook for the Irish economy and their own personal finances than older generations? Several factors could be at play.

While it is true that younger adults have not seen the same earnings increases as older adults, it could be argued that the crisis may have hit older groups harder. The job losses following the economic crisis translated to large hits to income and property values for many with large mortgages, making that group exposed to a range of financial woes.

Another factor which may explain the divergence in sentiment between younger and older age groups is that many millennials were entering the labour market at the height of the recession and its aftermath.

As such, their expectations in relation to career opportunities and earnings may be coloured by negative first experiences as a jobseeker. This means they may view their current circumstances less negatively than their older peers, as their reference point is the trough of the downturn. In such circumstances, the “new normal” of uncertainty and precarious prospects is the only normal they have known, making them more adaptable, less anxious and possibly having lower expectations than older age groups now ruminating on the threats of Brexit and trade wars.

Finally, the capacity to return to education (although it is debatable whether that postgraduate degree will definitely translate into better earnings or career advancement), the current lack of sizable financial obligations such as a mortgage, and the delay in beginning a family means that young adults may feel less “tied down” than older adults.

This might translate to a more optimistic outlook, at least compared with older age cohorts. For the time being, Ireland’s millennials are positive rather than panicking about their economic futures in a more uncertain environment. But this may change as they get older and nascent issues such as pensions or climate change start to trouble them.

1 Seán O’Brien: Anger over my parents’ break-up has never left me
2 Why Waterford is ‘the best Covid county in Ireland’
3 Two hundred Irish retailers for all your online Christmas shopping
4 Sinn Féin’s stand on Covid is facing increasing questions from political rivals
5 We need to reverse our thinking on lockdown
Real news has value SUBSCRIBE