‘Imagine if the two men were French. They might have had to kiss one another’ 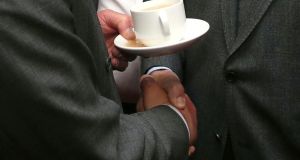 The video of Gerry Adams and Prince Charles shaking hands is among the weirdest films I have reviewed this year. In everyday life, a handshake is a perfunctory gesture, carried off with no more thought than one might bring to thanking a waiter. In the cauldron of perverse semiotics that is Northern Irish politics, the handshake can, however, be every bit as significant as the walking habits of men in bowler hats.

Do you remember Mr Shake-Hand Man from the defunct E4 series Banzai? The amiable Japanese chap would approach celebrities and, after securing a handshake, test their capacity for embarrassment by stubbornly refusing to let go. There is no way a pop star, actor or Hanoverian prince-thing can move away when physically attached to an admirer.

This was much like that. The prince, cuppa in one hand, “happens upon” Gerry in a receiving line and welcomes the Sinn Féin leader’s hand into his own. Adams is clearly aware that to rock back and allow himself to be questioned – “So, what do you not do? Not in the IRA? You have come far!” – would be to generate the accusations of “bowing and scraping” that some republicans throw at anyone who, when meeting royalty, doesn’t actually punch him or her on the nose.

What happens here is interesting. By leaning in and, while smiling his toothy smile, delivering a few friendly words directly into the prince’s ear, Adams gives the suggestion of equality. Standoffishness could be mistaken for deference. Gerry here has rather skilfully given the impression that they are just two blokes in the pub.

Something slightly different is afoot with the painfully prolonged holding of the handshake. The gesture is, as we’ve already noted, heavily “symbolic”. The meeting at NUI Galway was, of course, carefully planned at whatever levels count as the highest in this context. Later on, he and the prince joined Martin McGuinness for a private meeting at which minds were broadly met. “We did discuss the need for the entire process to move forward, particularly in regard to those who have suffered,” Adams said in full diplo-waffle mode.

The footage of the first meeting confirms, if we were in any doubt, that this handshake, far from being any casual greeting, was the entire purpose of the first brief encounter. Watching the clip, it is hard not to imagine the two hands being highlighted in the same sort of circle that tabloids use to point up cellulite in misused movie stars. Look! Neither has combusted. Neither has turned into a frog.

In a different time and place, there would be no reason why the two men could not be friends. Only the Prince of Wales has been part of any military or paramilitary organisation: he trained as a helicopter pilot and is still colonel-in-chief of various bits of the British army. But both men have a love of nature, a taste for tweed and some deeply peculiar New Age habits. Charles talks to plants. Gerry trampolines with his dog. A situation comedy starring Charles and Gerry would probably fail because they are insufficiently mismatched.

Nonetheless, real life being what it was, this latest significant handshake was worth reporting on. Presidents, queens and more important people such as Gay Byrne have been agonising over the potentially toxic nature of Adams’s hand since the peace process kicked into gear two decades ago. Just recall the hullabaloo when President Obama shook Raul Castro’s hand at Nelson Mandela’s funeral. Fox News could hardly be more upset if Obama had grasped the most intimate of the Cuban statesman’s extremities.

A handshake isn’t exactly a gesture of friendship, but it is one of the few circumstances in which two acquaintances will allow uncovered flesh to meet. So, there is a slight hint of intimacy there. At its least complicated level, it confirms a mutual acknowledgment that both parties exist. Imagine if the two men were French. They might have had to kiss one another. That really would be a scandal.

After lowering their eyes from being cast to heaven, the reasonable observer will note just what odd messages the story gives out about this country and this festival. Wasn’t the event ravaged and altered by les événements of 1968? That’s the theory. Yet some things remain stubbornly the same. It’s like we’re in a whole different country.

1 Rising Covid-19 infections among older people ‘a grave concern’, NPHET warns
2 Sweden and coronavirus: how has the outlier of Europe fared?
3 Nursing home ordered to pay €150,000 to care workers sexually harassed by 93 year old
4 Irish company to test vaccines on volunteers deliberately infected with Covid-19
5 The pick of the Dublin restaurant meals to go
Real news has value SUBSCRIBE