Donald Clarke: Trump gets the laughs while Ted scares the establishment

In Ted Cruz, the Tea Party finally has a candidate with a chance of seizing power 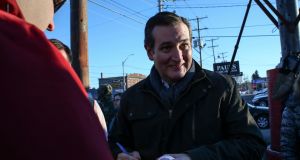 Ted Cruz: Moved from an impressive law career to become solicitor general of Texas and then senator for that state. Photograph: New York Times

A few months ago, The Trump & Palin Show would have been amusing. Oh, let’s be honest. It is still quite funny.

In her speech endorsing the OrangaTrump, Palin came across like a word cloud drawn from 3am conversations in the Redneck Tavern. “Kick Isis’s Ass! . . . Make America great again! . . . Right wingin’, bitter clingin’, proud clingers of our guns!” Trump and Palin have rendered all satire redundant. Few would raise an eye if they threatened to invade the Isle of Man or ban lederhosen.

Had this unholy alliance come together last summer, it could have been dismissed as of little more significance than the Saturday Night Live sketch it would inevitably generate. As at least one sage pointed out, at that point in the Republican campaign for the 2008 nomination, the late Fred Thompson led in the polls. By Christmas, however, the charismatic actor had gone back to playing fictional presidents.

In contrast, Trump won’t go away because a beery conflagration of middle- aged white male discontents believe their time has finally come.

Marco Rubio hasn’t got into gear, and the rest of the official selection looks as confused as Frankie Pentangeli’s brother. (That’s another Godfather gag, if you’re not keeping up.)

Last week, the domestic bookies finally woke up to the horrible truth and pushed Trump ahead of Rubio as favourite to take the Republican nomination. He is now at a terrifying 5/4 with most bookies. Those same turf accountants are offering 10/3 on Trump actually becoming president.

So we cannot rule out the prospect of seeing the thing beneath the tangerine rug wrapping himself in the ermine.

While processing that chilling vision, one may find oneself momentarily cheered by Ted Cruz’s rise in the Iowa caucuses. After all, Cruz is an alumnus of Harvard and Princeton. No less a liberal deity than Alan Dershowitz described the Cuban- American as “brilliant” when teaching him at Harvard. Cruz moved from an impressive law career to become solicitor general of Texas and then senator for that state.

The Republican establishment and worried liberals will, surely, admit that Mr Cruz is a grown-up politician. He is much the lesser evil? Right?

That party’s establishment will tear out their hair if Trump wins, but they may retire collectively to the conservatory with bottle of gin and pearl-handled revolver if Cruz takes the nomination.

We could fill the newspaper with disobliging comments about Trump. His blanket description of Mexicans as “rapists” dragged political discourse to new depths. The suggestion that Muslims be banned from entering the US was as illiberal as it was impractical. But you couldn’t call the man an ideologue. When not accusing Trump of exhibiting “New York values”, Cruz has enjoyed pointing out that Trump gave money to the Democrats as recently as 2010.

The more cerebral, more focused Cruz is a very different beast. Eight years after Obama’s election, the Tea Party has a candidate with a decent chance of seizing power.

Whereas Trump has little base in the party, Cruz has a mass of followers – religiously fundamentalist, anti-gun control, furious about Obamacare – who are set to grab positions of power and garrotte the quisling pantywaists.

There will never be such a thing as Trumpism, but Cruz really could lend his name to an unforgiving Manichean philosophy. For liberal and moderate Republicans, he is much the more worrying of the two men.

Cruz is only 45. He ain’t going anywhere. That really isn’t funny.