Donald Clarke: ‘The Donald’ is ruining a good name 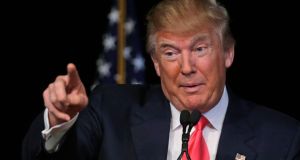 Thanks a bunch, Donald Trump. Thanks for ruining a perfectly good name. Not only have you soiled a melodic Anglicised variation on a Celtic classic but, by allowing the definite article to precede it, you imply that this incarnation is the deified avatar of Donaldishness. Mr Trump is “The Donald”. The rest of us are indefinite copies. We may have written brilliant, post-beatnik songs for Steely Dan. We may have played the forger in The Great Escape. No matter. A clatter of Donalds mill pathetically before a rough obelisk, upon which the cleverest Orangutan ever to emerge from the Borough of Queens angrily waves bones at distant constellations. I have always been happy enough with my name. Derived from the Scottish Gaelic Domhnall, “Donald” has a reek of heather and damp grouse to it. Billy Connolly used to do a routine about those posh Scottish forenames that are really last names: Campbell, Murray, Cameron.

My name is not one of those. It is not associated with the bogus re-invention of Scottish culture that skirled up in the wake of Sir Walter Scott. As long ago as the ninth century, men ruled the nation that “The Donald” wants to turn into a giant golf resort. Heed that, Kylie and Zane. This is not a name for blow-ins.

In the Northern part of this island, “Donald” is, of course, more commonly heard in the Protestant communities. It does not, however, have the terrifying, bowler-hatted, Sabbath-honouring ring of such Orange classics as Mervyn or Edwin. I see an archetypical Protestant “Donald” as the sort of fellow who wears a straw hat to Church of Ireland bake sales. Donald will not bellow himself into rubicund apoplexy on the 12th day of July. He’ll be too busy trimming his Climbing Lady Hillingdon while listening to the Archers.

Elsewhere in Ireland, the name is more rare than non-Donalds might suspect. I can remember meeting only two “southerners” thus identified in 50 years on the planet. (Shout out to Donald Taylor-Black, documentarian and head of the National Film School!)

Donald is probably just a little too close to its Hiberno-Irish relative. Look, new parent, you’ve already written out a perfectly decent name in the first five letters. Why bother adding a second unnecessary “d”?

Singular exoticism James has a different, monosyllabic shape to Séamus and, thus, can thrive beside its Irish equivalent. Nobody could mistake a “Seán” for a “John”. In contrast, the average Irish Donald will barely get through a day without receiving an email addressed to “Donal”. It is easier just to stick with the five-letter incarnation.

All this lent the name a singular exoticism. It was just one letter away from something very familiar, but remained as rarely heard as “Fantabulon the Magnificent”. Donalds of an earlier generation had to endure elderly relatives constantly asking where their “troosers”were. For 80 years, young Donalds were assailed by quacking in the playground. The sartorially bereft protagonist of the Andy Stewart song and the perennially furious cartoon duck were just two among many admirable famous bearers of a great name.

Though one comes across Donalds in England and Scotland, it is in the New World that the two lovely syllables asserted themselves most forcefully. I was named partly for, yes, Donald Clarke, a New Zealand rugby player about whom I know little, and partly for Sir Donald Bradman, a cricketer whose gifts as a batsman still defy reason.

There’s a soundness to “Donald” that doesn’t attach itself to the more louche “Ronald”. Who could imagine the most fecund half of Steely Dan – those jazz-pumped melody puzzlers – as Ronald Fagan. With a Ronald at the helm, the band would never have made it out of suburban New Jersey. Donald Fagan did the business. Cerebral cool Donald Sutherland retains the cerebral cool we expect from a man so exquisitely named. Closer to home, Donald Sinden boomed and Donald Pleasence fluted his way through horror and Pinter. As a child, I never saw a Donald I didn’t like.

We began by suggesting that Donald Trump ruined it for the rest of us. He has certainly gone some way to turning “Donald” into the “Adolf” of its era. (How many children do you meet called “Pol Pot” these days?) But he can’t take sole responsibility. Donalds have been stinking up the US Republican Party for decades.

Much of the work had already been done before indefinite Donalds made way for Definite Donald. The Bad Donald rise.

Our Donaldian heroes are aging. Put on Singin’ in the Rain to help yourself forget. Look at the lovely Donald O’Connor fly. Good mornin’ to you, America.