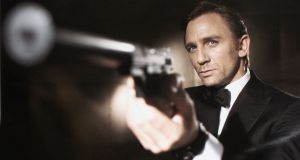 Danial Craig’s Bond still kills for Britain but the attitude to women has moved on from caveman sociopathy. Photograph: Greg Williams/Eon Productions via Getty Images

More than a few obituaries for the Playboy nude photo shoot have pointed out that, yes, people of both genders once did read that magazine “for the articles”. The publication was cherished for its lengthy interviews with such figures as Martin Luther King, Jean-Paul Sartre, Betty Friedan and Germaine Greer. It was in Playboy that Jimmy Carter admitted that: “I’ve committed adultery in my heart many times.” (Something many married readers were, presumably, set to commit with photographic subjects in the same issue.) Such authors as Kurt Vonnegut, Doris Lessing and Margaret Atwood had fiction published in those pages.

As news emerges that, humbled by the free explicit pornography on the internet, Playboy is to cease printing pictures of naked women, we look back with puzzlement on a now baffling institution. The Sun newspaper, which, earlier this year, taunted liberals by pretending to drop Page 3, surrounded its end-of-the-pier pornography with end-of-the-pier journalism. The blend was seamless. Nothing like Playboy exists in popular culture: French intellectuals musing about post-structuralism alongside photographs of inexplicably naked country girls bending uncomfortably over convenient haystacks.

The news arrives less than two weeks before Spectre, the 24th James Bond film, hits cinemas. The ludicrous agent and the smutty magazine have been manacled together since birth. Casino Royale, the first 007 book, emerged in April 1953. Hugh Hefner launched Playboy eight months later. Ian Fleming anoraks will delight in telling you The Hildebrand Rarity, one of only two 007 stories not to have leant its name to a film (the other is Risico),first appeared in an issue of Playboy.

More to our current point, both Fleming’s novels and Hefner’s magazine facilitated aspirations to a bogus sophistication centred on booze, cars, dinner jackets, posh food and recreational misogyny. Too much? Consider this passage from Casino Royale: “And now [Bond] knew that . . . the conquest of her body, because of the central privacy in her, would have the sweet tang of rape.” That stuff about “central privacy” merely counts as bad writing, the “tang of rape” identifies Bond as Her Majesty’s own psychopath.

Has there ever been a more gruesome manifestation of casual sexism than the enthusiasm for the Playboy Mansion? In the excellent documentary Best of Enemies, Gore Vidal, the waspish left-wing intellectual, appears on Hefner’s Playboy, After Dark TV show. Playboy bunnies – women dressed as sexy rabbits – flit about like so much incidental decoration. Postwar US prosperity and perversions (in several senses) of the sexual revolution have delivered men the opportunity to live out sordid empty-headed fantasies amid hollow displays of tasteless luxury.

Thousands of miles away, a dental supplies rep from Kettering was reading The Man With the Golden Gun and imagining himself virtuoso of violence and a dominator of glamorous, but ultimately compliant, women.

Much of Fleming’s original cultural paraphernalia does remain. In one publicity image for Spectre, Daniel Craig can be seen wearing a dinner jacket. He still kills for Britain. But the attitude to women has moved on from caveman sociopathy. Léa Seydoux’s character in Spectre is called neither Minxie Suck-Todger nor Fruity McBang-Bond. She is a psychologist named Dr Madeleine Swann. M only recently stopped being a woman. Once a love-struck “spinster”, Miss Moneypenny, played by Cantabrigian Naomie Harris, is now as tough as Bond.

That old post-war notion of boozy, sexist male “sophistication” is so wearied that it has qualified for historical pastiche in series such as Mad Men. We are well shot of the slicked-back fantasy sired by Hefner out of Fleming. We’ve grown up a little. We no longer need naughty nurses with our Doris Lessing.