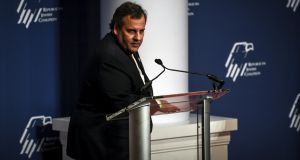 Oh that’s nice. Last week, a cadre of witless meatheads took to molesting less svelte commuters on the London Underground. There has since been some debate as to whether the campaign might have been a conceptual art piece or a commercial promotion. But the fact remains that some passengers were handed cards whose text began: “Our organisation hates and resents fat people.” The so-called Overweight Haters Ltd went on to suggest that such folk soaked up NHS time and consumed too much of the Earth’s resources.

Whether meant sincerely or not, the campaign confirms that too many schoolyard bullies carry their aggressive mindsets into adulthood. They harass female celebrities on Twitter. They undermine workmates at the water cooler. Civilisation is, perhaps, little more than the decorative veneer that disguises unchanging barbarian impulses. Look. See the Visigoth in the mirror. How does that make you feel?

The stunt highlights a more particular strain of aggressive prejudice. The perpetrators of “fat-shaming” are, for the most part, no different to other bullies, but there is a self-righteousness to them that sits ill with such unfriendly psyches. The archetypal fat-shamer feels that – rather than picking on people for the sake of it – he or she is making a moral point. The taunting and teasing is a way of revealing the sins to the sinner.

A few months ago, the alleged comedian Nicole Arbour created a fuss by posting a useless video entitled “Dear Fat People”. In the piece, she suggested being obese was a form of assisted suicide and that “fat-shaming is not a thing. Fat people made that up.” When quizzed about her stance on the BBC, Arbour insisted her act was aimed at helping fat people overcome their unhealthy habits. See? The moral authority actually lies with the bully again.

You might argue such prejudices have always been around. There’s something in that. The fat lady has long been a butt of jokes in broad comedy. Though an exquisite performer with a sweet voice and gorgeous timing, Hattie Jacques still permitted the Carry On… team to use her size as a joke in itself. Billy Bunter needed to be huge. So did Chris Farley. It goes on.

Something has changed, however. In an age when perfectly ordinary people – lawyers, brickies, baristas – attend the gym more frequently than professional athletes once did, an equivalence between moral decadence and imperfect body shape (by the fat-shamer’s standard) has become embedded in discourse.

known to joke about the fact himself

A full four years ago, Michael Kinsley wrote a column about Christie in Slate. He pulled no punches. “Chris Christie cannot be president: He is just too fat,” Kinsley explained. “Why should Christie’s weight be more than we can bear in a president? Why should it even be a legitimate issue if he runs? One reason is that a presidential candidate should be judged on behaviour and character.” Once again the fat-shamer is assaulting the moral high ground. Kinsley’s argument is that Christie’s substantial heft indicates a lack of self-control. Heck, a man who can’t stop himself eating a second doughnut might not be able to stop himself invading Mexico.

The rush to fitness and the adoration of Hollywood aesthetics has made too many of us body fascists. Supermarket tabloids draw circles round “cellulite” on perfectly healthy celebrities. Idiots molest larger people on the tube. Chris Christie is defending his waistline when he should be defending his economic policy. How easily we give in to new conformities.