Donald Clarke: By ignoring TV the pope is reaching for the remote 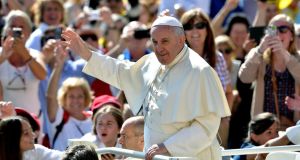 Pope Francis salutes the crowd as he arrives for his weekly general audience in St Peter’s Square on Wednesday. Speaking to an Argentinean newspaper, he said he has not watched television since 1990. Photograph: Alberto Pizzoli/AFP/Getty Images

I have more than a few disagreements with the pope, but, as holders of that office go, he seems agreeable enough. Unlike Stephen VI, he didn’t put a dead body on trial. Unlike Sergius III, he did not (to our knowledge, anyway) arrange the murder of any predecessors. What a shame that he has, this week, revealed himself to be a very particular class of highbrow bore.

There is, I suppose, nothing wrong with not watching television. Some people don’t have a taste for the medium. Others don’t have the time. But there’s no need to brag about it. There are few shades of pomposity more dazzling than that worn by the pontificator who, when discussion moves to Dr Who or Big Brother, smugly explains that: “I don’t have a television, actually.”

These people seem to occupy a disproportionately large number of chairs on snooty panel shows that they will, presumably, never see because they don’t have a television, actually.

This gives them the opportunity to explain – in an aghast tone – that “people” seem to find the “no TV” revelation extraordinary. Why, it’s as if, by not having a telly, you have announced yourself as some kind of weirdo.

Glad you’ve been keeping up, man with monocle and lady wearing gloves indoors. You are some kind of weirdo. Of course, the world needs weirdos. I am one myself. But you can’t step away from the medium that defined the 20th century and then be surprised when you are put in the weirdo category.

Worse still are the people who own televisions, but boast that they only turn them on to watch the news and nature programmes. This is rather like buying a car and only using the radio and the cigarette lighter.

Actually, it’s not like that at all. People who take this line are invariably liars whose evenings are actually spent huddled over Coronation Street and The Man with the 10-Ton Testicles.

After all, he promised the Virgin Mary herself that he would stay away from the deadly entertainment device.

You don’t promise the Virgin that you’re going to smoke more fags or eat more kebabs. Francis, like our secular bores, wants to be congratulated on missing a quarter of a century of EastEnders.

Television kills conversation between families and gets in the way of outdoor activities such as hill-walking and team sports. It exposes viewers to sex and violence from an early age. These are just a few of the medium’s undeniable virtues.

Who knows what sent Francis running to the Virgin Mary in 1990. The slackening of Twin Peaks’ second series might have had something to do with it. It seems unlikely that The Word, the horrific Channel 4 post-pub series, was broadcast in Argentina, but similar schools of youth hedonism were everywhere in that year. The Fresh Prince of Bel Air? Beverly Hills 90210? This decision is beginning to make some sense.

Much better was to come. The Simpsons was in its prime. Seinfeld was about to up its game. Frasier was spreading his urbane unease across Seattle. Why should the Virgin Mary congratulate anyone for missing the opening seasons of ER?

A novelist would have trouble constructing an accurate picture of contemporary society without some knowledge of what his characters were watching on TV.

Similarly, a priest will miss important nuances of everyday life by keeping his own distance from the television set. The medium is now written into the modern human’s psyche.

The situation is even more pronounced in the era of online video. Young people are more absorbed in moving images than ever before. Sadly, the pope doesn’t trouble the internet either. Why, the Catholic Church is like some medieval relic.

1 ‘Insane’ gathering of hundreds of students in Galway condemned
2 Prepare for six to nine months of Covid-19 restraints, warn health officials
3 Do headstands, clear out a junk drawer, have sex: 15 ways to re-energise your day
4 Speed and distance of Covid-19 droplets tracked by Mater researchers
5 Probate is changing: What does that mean for you?
Real news has value SUBSCRIBE