Don’t sell, buy: the State should hold on to Aer Lingus share and buy out Ryanair 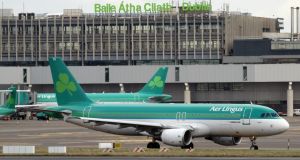 ‘The BA/AIG offer of €1.3 billion is a very poor one. If we were to try to re-create Aer Lingus as it is today, it would cost a multiple of this offer. The taxpayer will get €325m for its Golden Share which, frankly, is peanuts.’ Photograph: Paul Faith/AFP/Getty Images

Aer Lingus is a remarkable Irish company. It should not be sold off. Ireland will lose by selling and win by retaining and building the company. It can thrive under expanded Irish ownership.

The narrative of the advocates for selling out reeks of a strong, postcolonial inferiority complex. Sell little Irish Aer Lingus to the big, superior, foreign multinational which might protect and grow it. Foreign ownership is always better. Theirs is a cannot-do, everything has a price attitude, with no strategy other than the market knows best.

The fact is that the commercial future of the airline under British Airways owner IAG would be far less certain than under a strengthened Irish ownership. There are strong commercial and strategic reasons for retaining Irish control of the company, based on connectivity, on the importance of aviation to an island, on the sale price, on the multitude of wonderful enterprises the company has spun off, on future expansion and on the political vision of building and retaining a cohort of world class indigenous firms.

Aer Lingus’s aircraft were once the symbols of modernity for a relatively backward country. Today it is a brand that symbolises the economic and social success of the best of modern Ireland. It is a company and a brand which inspires disproportionate emotional feelings for many Irish people.

It survived many crises and was the first legacy airline to meet the challenges of low cost airlines and to beat them on service. It faced the might of Ryanair, 200 metres across the campus, an airline which would never have existed without Aer Lingus. For it was founded by a former Aer Lingus executive who was fully backed by Aer Lingus in his venture and which provided him with the money to start the competitor airline.

In its 79 years it also spawned many top executives, and many companies in healthcare, hotels, airlines, recruitment, project management, aircraft maintenance and leasing.

The Aer Lingus slots are worth up to €925 million, it has net cash of €445 million and one of the most valuable brands in Ireland. Thus the BA-IAG offer of €1.3 billion is a very poor one. If we were to try to recreate Aer Lingus as it is today, it would cost a multiple of this offer. The taxpayer will get €325 million for its golden share which, frankly, is peanuts.

The global consolidation of airlines does not mean that there is no room for successful regional airlines. Four airlines control 80 per cent of US aviation, Europe is heading this way and it may soon be time for regulators to go back to breaking up airline cartels as they fix fares.

Aer Lingus, our 19th largest indigenous enterprise, is of sufficient efficiency to survive and grow from its Irish hub, both to the east and west, particularly with its exceptional brand.

The alternative to sale is not the status quo. Under current rules the Government’s 25.1 per cent golden share along with another 5 per cent of shares blocks the sale of the London Heathrow slots.

The Government must take steps to secure this blocking. Then it must move to snap up shares which Ryanair, under British competition rules, has to sell and thus build a controlling interest of 50.1 per cent of Aer Lingus. This share ownership should be put at arms-length within New Era, the State development board. Its financial experts would assess any future requests for capital for expansion on commercial terms and allow the company to grow under Irish ownership. In the event of an opportunity for expansion or a severe downturn there could be a rights offer to raise additional capital. Only then would shareholders be involved.

The view that the State should not own commercial enterprise is ideological, out of date and simply wrong. The “private ownership good, public bad” line was undermined by the collapse of the six indigenous banks, many developers, the Quinn group, the near-collapse of privatised Eircom and the privatised lottery company, which seems to have difficulty running a draw.

Nor did the privatisation of Aer Lingus in 2006 “save” the company, as some sell-out advocates have asserted. Profitable through many years in public ownership, it actually made large losses following privatisation but then became profitable again, other than in 2014 when it had exceptional costs.

A small open economy in the globalised world needs a share of key enterprises. If this means public ownership for strategic reasons then that should be part of enterprise policy. Aer Lingus is our strategic aviation bridge with the rest of the world. Public control would eliminate uncertainty. The Government should not base its decision on a mere commercial offer but on long-term national interests.

4 Unionism not emotionally ready for conversation about united Ireland