Do we really want to give Irish passports to all these Brits? 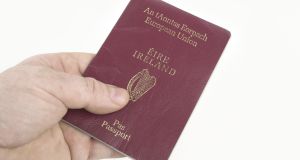 We live in unpredictable times, but Irish people could be forgiven for thinking recent reports that Ian Paisley jnr was encouraging his constituents to apply for Irish citizenship were a joke. Yet, like many savvy British politicians, Paisley was simply adapting quickly to the uncertainty and upheaval of Brexit. The impending demise of Britons’ rights to travel, live, and work across the EU has sent people across the United Kingdom rummaging through their attics for evidence of entitlement to an EU passport.

The huge Irish diaspora in the UK means Ireland is the biggest focus of these efforts: anyone with a grandparent born in Ireland is entitled to claim Irish citizenship, and the numbers entitled to that status in Britain may exceed the entire population of Ireland.

While millions of applications are unlikely, the Irish Embassy in London and the Passport Office have already been deluged, leading the Minister for Foreign Affairs to appeal for calm, the hiring of hundreds of staff, and scarce application forms being sold on eBay.

Beyond finding logistical ways to deal with the surge of interest, it is also important for us to ask what implications the situation has for our views of Irish citizenship and nationhood. Some may bristle that the intention of including those of Irish descent in our citizenship was to accept the scattered and partitioned nature of our nation, not to offer a badge of convenience for self-identifying Britons whose EU rights have been forfeited by British voters. Many will be even more uncomfortable with hardline unionists in Ulster taking up Irish citizenship despite longstanding hostility towards the State.

Such concerns misunderstand the expansive nature and history of Irish nationhood. Citizenship is at the heart of our independence, a foundational idea for the 1916 Proclamation, the 1922 Free State Constitution and our current Constitution. Irish citizenship was a radical idea for a British empire that did not possess such a republican concept and, even after independence, its status was disputed.

For many years, the UK continued to insist Irish “citizens” were actually “British subjects”, and lobbied for Irish passports to be rejected so Irish people would have to travel on British passports. In 1939, Britain opposed references to king and commonwealth being removed from a new Irish passport design. The status “citizen of Ireland”, and the document which bears it, are symbols of our freedom and nationhood.

The Constitution has a broad notion of that nation, including in its membership those born in Northern Ireland, and cherishing a close and special link with those of Irish ancestry living abroad who share our “cultural identity and heritage”.

Our inclusive citizenship helps us reach across the Border and overseas to embrace those who wish to feel part of our nation even though they do not dwell in the State. It seeks to foster a sense of community and belonging between all members of the Irish “family”, wherever they may be.

This openness is vitally important to a state plagued by emigration and division, often as much the homeland of a scattered and partitioned nation as the citizens’ republic of our grandparents’ dreams.

At home, too, there have been imperfections and inequalities. Until 1986m our citizenship laws were heavily gendered, reflecting the deeply patriarchal nature of our state and society.

A surge in those wanting to “become Irish” (as one soon-to-be-Irish New York Times journalist put it recently) presents an opportunity to move beyond past imperfections towards the broad citizenship we have always promised.

Many of those seeking a Brexit passport share a major part of contemporary Irish identity: they wish to be European citizens. Ireland has sewn the EU into its fabric, and its future lies in Europe. We should be happy to welcome those who, as well as sharing part of this country’s past, aspire to be a part of that shared future.

We must also rediscover that citizenship is a combination of what the Free State Constitution called “privileges” and “obligations”. This is true both for individual citizens – who have a duty to actively contribute to their nation – and for the State, which has clear post-Brexit responsibilities to citizens outside the State. The constitutional status of Northern Ireland is being changed against the democratic wishes of its people, and we must lead European opposition to a “hard” border being reimposed on this island.

We must also finally find a way to give voice to citizens who have previously lived in the State but now live abroad. Votes in presidential elections would be an important “first step”, but some degree of Oireachtas representation is vital. Our European partners offer many viable models to follow, from Poland’s postal voting to France and Italy’s overseas constituencies. Citizenship cannot be a dead letter.

The awakening of “hibernating” citizenship among those with Irish grandparents must also spur action on the rights of EU nationals living in Ireland. Despite being our fellow citizens in the broader European project, their political rights remain limited, while the too-often limited rights of other immigrants living and working in the State also require attention.

Despite growth, our population still lags other small European states, and immigration is key to our future: we already have one of the highest rates of naturalisation in the world. We need a broad conversation of what we want Irish nationhood to be, alongside, not in opposition to, ancestral claims of citizenship.

Brexit brings great risks for Ireland, as our nearest neighbour seemingly turns away from openness and the wider world, but it can be an opportunity for us to embrace an expansive, inclusive Irish citizenship. As we reach a century of independence, it is time to discuss what membership in our nation is to mean.

Dr Christopher Kissane is a historian of citizenship at the London School of Economics and Political Science. Dr David Kenny is assistant professor of constitutional law at Trinity College Dublin