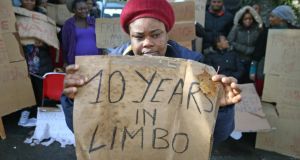 A protest against the direct provision system in 2014. Photograph: Patrick Browne

It’s not often the judiciary finds on a matter of social justice and rolls the ball back to the executive to determine how the issue should be resolved. This week’s unanimous, “in principle” Supreme Court ruling on the entitlements of asylum seekers to find employment, upholding the minority judgment of Gerard Hogan in the Court of Appeal, should be applauded. Appropriately, it offers the Dáil the opportunity to set about its responsibilities towards migrants in a comprehensive and considered fashion and in doing so to act in our interests, as the people who elect it.

Ireland has just over 4,000 men, women and children living in direct provision. In September 2015 we undertook to accept a similar number of refugees and asylum seekers by September 2017; however, with four months to go, we’re woefully short of that number simply because we have a system that cannot cope. There should be no shame in that; there need be no hand-wringing by “excuse-junkie” politicians or sighs of despair by diligent civil servants; there should, however, be an acknowledgement that the full apparatus of government alone cannot meet the wider needs of civic society.

This week’s decision should prompt the body politic to establish a radical, innovative approach to an issue that, unresolved, will continue to be a blight on the moral wellbeing of our society. More significantly it will leave future generations at best saddened by our failure to act and, very possibly, dealing with serious ramifications of us not dealing with the reality of thousands of people in crisis coming to our shores and seeking refuge.

Let’s be clear. We are not dealing with the problem. That’s no slight on any one arm of government nor on any of those working at the coalface endeavouring to provide for those who have fled war and violence in the hope of starting afresh in Ireland. Let’s be clear also that across those already here, within and without direct provision, and those who will join them, not everyone has the same case for asylum or is equally deserving of sanctuary but, in what sector of our society is there equality of entitlement? Let’s be clear, too, this is not an issue upon which we should, as citizens, simply turn to government to resolve; the active participation of the whole community is paramount if it’s to be dealt with in a substantive manner.

In recent months I have interacted with some in direct provision who would like to work. One, a 22-year-old woman from Afghanistan, three years ago fled personal circumstances that no one approaching their 20th birthday should ever endure. She has been in direct provision for 18 months, desperate to find work so she can fund her dream: to study medicine and practise as a doctor in Ireland. She has fluent English, is determined, bright and respectful of what Ireland could offer her; she is also patient, but her days are spent doing rudimentary things just to avoid the utter boredom and monotony of life in direct provision.

Then there’s the 29-year-old Syrian man, a qualified dentist, who has been in direct provision for six months and is eager to sit whatever exams would be required to become licensed to practise here. The war meant he had to flee what had been an emerging career in a thriving practice and a lifestyle as good as any young professional would enjoy in our cities and towns.

These examples are not typical of all those already here and who will arrive – but importantly, for those who would want to portray a very different narrative, nor are they untypical. There are Irish volunteers and professionals who have spent considerable time in camps across Europe and the Middle East who can testify to a wealth of human capital that has found itself displaced, alone and without any life compass to guide them in the years ahead.

In the Supreme Court ruling – which related only to the issue of the right of asylum seekers to seek employment – Mr Justice Donal O’Donnell said “the damage to the individual’s self-worth and sense of themselves was exactly the damage that the constitutional right to seek employment sought to guard against”. This is seminal; some years ago, a retired member of that court, Justice Catherine McGuinness, called for Ireland to sign up to an EU Directive for asylum seekers to be allowed to work; she also raised more worrying concerns about the wellbeing of children in direct provision.

The development of our children – including those who have sought asylum here – is affected directly by the wellbeing of their parents. The provision of basic human rights, including that of being entitled to work, is as critical to creating a positive environment for families in direct provision as elsewhere.

It’s obvious that simply “managing” the challenge on a day-to-day basis to keep the needs of migrants and asylum seekers from developing into a crisis is both short-sighted and unsustainable. The Supreme Court decision should serve as wake-up call that the legislature requires, not only to deal with the obligations to meet an existing EU Directive but also to deal comprehensively with the wider, complex issues that arise in providing a full and genuine welcome to all asylum seekers – other than those who would be deemed a threat. The legislature must admit it cannot do this alone. As citizens, we must step up to our responsibility to help.