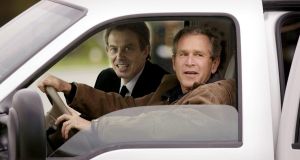 Inevitably, to coincide with the publication of the Chilcot report, the images of Tony Blair as a young prime minister visiting the ranch of US president George Bush were aired. They are excruciating images: Blair looks like he cannot believe his luck that he is there, personifying the “special relationship” between Britain and the US. He is only short of pinching himself.

In contrast, on Wednesday we got to see the older, anguished and emotional Blair as he sought, yet again, to spin things his way, by apologising and not apologising at the same time. It was as pathetic as the Bush ranch images, and both of course, are inextricably linked, as the Chilcot report has ensured Blair’s political epitaph can be reduced to six words, written in a note to Bush in July 2002: “I will be with you, whatever.”

Blair believed he had a moral certainty and a purpose that were superior to the anti-war movement. His defenders will insist that deciding to support the invasion of Iraq was when he began to show real leadership, by putting his career and reputation on the line.

In February 2003, he told his party’s conference: “I do not seek unpopularity as a badge of honour. But sometimes it is the price of leadership. And the cost of conviction . . . I can only go one way. I’ve not got a reverse gear. The time to trust a politician most is not when they’re taking the easy option. I believe the British people will forgive a government mistake, but what they won’t forgive is cowardice in the face of a challenge. All you can do is to decide what is the right way and try to walk it . . . leadership comes by instinct. It’s the only leadership I can offer.”

In truth, he played a much more dangerous game, and it was played at a terrible cost. He craved external approval too much. Days after the 9/11 attacks on the US in 2001, Bush told the visiting Blair that “America has no truer friend than Great Britain”, prompting a thunderous standing ovation. It went to Blair’s head, and he wanted more; he believed the Bush myth that the Anglo-American relationship was the most powerful force for good in world affairs.

In July 2003 he once again left Washington in celebratory mood after a rapturous reception from the US Congress. The next day, he was told that David Kelly, the former UN weapons inspector, had taken his own life, the media harassment and ethical soul-searching over the decision to go to war having overwhelmed him. Blair responded by looking sorrowful, grave and strained. There was one face for the US and another for Britain.

When Blair came to power in 1997 there was a sense that Britain in the preceding decade, deprived of empire and plunged kicking and screaming into Europe, was suffering an identity crisis.

In the aftermath of the polarising Thatcher era, Blair tried to be conservative and innovative, but fell between the two stools in trying to find a new definition for what it was to be British.

As historian Tony Judt characterised it in Postwar: A History of Europe Since 1945: “Blair’s new-look politics would not long survive the disastrous decision to embroil his country and his reputation in the 2003 invasion of Iraq – a move which merely reminded foreign observers that New Labour’s Third Way was inseparably intertwined with the UK’s reluctance to choose between Europe and the US.”

It was also, as was indicated by the note he sent to Bush, which had not been discussed with cabinet colleagues, about a complete distaste for consultation.

War correspondent Robert Fisk, however, summed him up that same year as “this vain, deceitful man, this proven liar; a trumped-up lawyer who has the blood of thousands of Arab men, women and children on his hands”. Nine years later, it is that assertion which resonates.

1 Somebody needs to explain sovereignty to Johnson before it is too late
2 ‘Shock and dismay’ as barristers asked to repay Government Covid grants
3 Operator rejects claims by Dr Tony Holohan that car parks are full
4 Irish designer of Oxford vaccine: ‘I’ve never worked so hard in my life’
5 Holohan calls for end to victim-blaming on breaches of public health guidelines
Real news has value SUBSCRIBE