Diarmaid Ferriter: Nothing new in the fuss about Pearse thinking he was Jesus 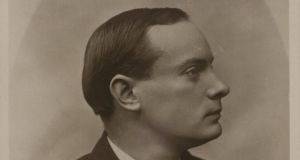 Pearse’s writings “consistently and deliberately and without reservation equate the patriot and the patriot people with Christ. Photograph courtesy of the National Archives of Ireland

In 1972, an article that appeared in the relatively rarefied pages of the Jesuit published journal Studies caused controversy. Its author was Fr Francis Shaw, Professor of early and medieval Irish at UCD, and it was presented under the title: “The Canon of Irish history: A Challenge”. It certainly lived up to the promise of its title. Shaw highlighted how Pearse’s writings “consistently and deliberately and without reservation equate the patriot and the patriot people with Christ. I accept without question the sincerity and the subjective reverence of Pearse in this matter, but one has to say that objectively, this equation of the patriot with Christ is in conflict with the whole Christian tradition and indeed with the explicit teaching of Christ…Christ made it unmistakably plain that he was not a national saviour”. Pearse, had no such misgivings, explicitly professing “the doctrine of the blood sacrifice in terms of the Gospel”. Physical force separatism thus assumed the status of the “gospel of Irish nationality”

Shaw castigated this version of Irish history and in particular the idea that Irish people in 1916 had been in need of redemption by the shedding of blood. He deemed his intellectual challenge necessary because “one of the commonest occupations in the Ireland of today is the plying of sleeping dogs with tranquillisers”.

The year the article was published was the bloodiest of the Troubles in Northern Ireland; indeed, it was published, according to the editor of Studies, as a “tract for the present troubled time”. Shaw, however, who died in 1970, had written it for publication in 1966, the 50th anniversary of the 1916 Rising, under the title “Cast a cold eye … prelude to a commemoration of 1916”. It was deemed unfit for publication at that time by the editor who saw it as “untimely and even inappropriate”.

Given the carnage in the North, the impact of Shaw’s piece was understandable; as historian Patrick Maume has noted, it “coincided with intensive debate about whether traditional Irish nationalist self-images had contributed to the conflict in Northern Ireland and threatened to unleash similar conflict in the Republic; this context gave the essay an explosive impact”. The Jesuits were accused by Conor Cruise O’Brien of opportunism in suppressing Shaw’s piece until “it became convenient to distance the Catholic Church from militant nationalism”.

So how should Shaw’s intervention be viewed? Certainly, it took courage to write such a piece, but it was also shaped by prejudice and omissions. Shaw, no more than any other commentator on 1916, was influenced by his background, education, temperament and personal experiences. He was born into a substantial business dynasty in Westmeath. His father had endorsed John Redmond’s support of the Allied war effort, and was a Cumann na nGaedheal TD in the 1920s. One of Shaw’s intellectual mentors had been Eoin Mac Neill, whom Pearse had so egregiously deceived before the Rising. Shaw had studied in Germany during the seizure of power by the Nazis and as Maume puts it, “attributed the totalitarian movements of the twentieth century to the efforts of ideologues to force common humanity into utopian projects.” All these factors were relevant to his perspective.

In elevating the status of Mac Neill and Redmond, Shaw conveniently glossed over their differences, did not do enough justice to context and left a hole in his analysis by ignoring the important role Irish Protestants played in debates about Irish nationality. Yet his contribution was important in expanding the existing parameters of discussion about 1916 and, as underlined by this newspaper’s religious correspondent Patsy McGarry’s trenchant column this week, his ideas still reverberate.

McGarry made important points about the hierarchy of commemoration priorities, but I’m not convinced his assertion of the immoral “quasi-blasphemous stance of Pearse and his colleagues” does justice to a complex group of rebels (who did not all sing from the one hymn sheet when it came to religion) and the national and international context- militant and bloody - they emerged from. The 1916 Rising would not have occurred without the First World War, when conflicting assertions of morality abounded. Those who encouraged Irish men to fight in the British army also used the religious card; what happened to Belgium should, in the words of contemporary Irish recruitment propaganda, “stir the blood of Irish Catholic men”.

What we are currently experiencing in relation to remembering 1916 are new perspectives but also old or updated rows. What we do not need is the shouting down of sincerely held perspectives or discussion to become so reductive and devoid of context that we are left with cartoon villains or heroes. Even in the midst of his castigation of Pearse, Shaw was firm in asserting he “was a man of complex character”. In the words of Joe Lee, who wrote the entry on Pearse for the Dictionary of Irish Biography, “The task of rescuing Pearse from the clutches of his idolaters and demonisers continues.”

1 Ciara Kelly: I was pregnant, unmarried, a junior doctor and I got old-school comments
2 Suspected murder-suicide shooting in Cork leaves father and two sons dead
3 Son (23) who died in suspected Cork murder-suicide was due to graduate
4 Third person arrested in education board corruption investigation
5 ‘Shellshocked’: Outrage in Australia after women on flight strip-searched in Qatar
Real news has value SUBSCRIBE