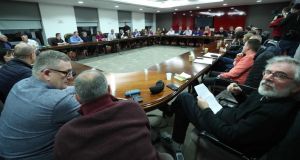 On June 26th, 1997, the ceann comhairle, Séamus Pattison, had to remind TDs of a long-standing custom in Leinster House: that maiden speeches be uninterrupted. There was little chance of that happening, however, when the new Sinn Féin TD for Cavan-Monaghan, Caoimhghín Ó Caoláin, rose to speak as the party’s new and sole Dáil representative. As he spoke, some TDs interjected to refer to murders and broken ceasefires.

Fifty years previously, Fianna Fáil TDs had entered Leinster House after the end of their abstention; relations were fraught, with Civil War wounds still raw, but the head of government, Cumann na nGaedheal’s William T Cosgrave, was still able to contend: “It is the best thing that has happened during the last five years.”

19 New to the Parish: Abdullah Afghan and Fatima Abdullah arrived from Afghanistan via Pakistan

22 Miriam Lord: The Bisto Kids get a taste of their own Davy gravy

29 Before you buy an electric vehicle, ask: Will I drive it enough to make it eco-friendly?

34 Long Covid in children: New data is cause for concern, scientists say

36 Home office, home bar and scope for another home alongside for €1.55m

38 Covid-19 Vaccine Tracker: What's available in the Republic of Ireland and what else is coming?