Diarmaid Ferriter: ‘Cultural Catholic’ is a euphemism for lazy hypocrite

Amid Church failures to confront decades of abuse, Ireland still has devoted believers 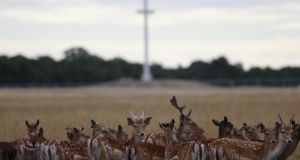 Papal Cross in Phoenix Park: 78% of the population identified themselves as Catholic in 2016 and the practice of Catholicism remains strong by international standards. Photograph: Nick Bradshaw

Those pilgrims who participated in the annual Croagh Patrick climb at the end of July were told at the summit by the Catholic Archbishop of Tuam Dr Michael Neary that they might feel “they are strangers in a strange land . . . We are very conscious of the slow, silent decline of faith in Ireland.”

An estimated 5,000 people completed the pilgrimage in ideal weather conditions, which certainly would suggest popular piety has dramatically reduced. The number of pilgrims who made the climb on Reek Sunday in 1999, for example, was 25,000. Likewise, Mass attendance rates in Ireland have declined significantly: one estimate in 2016 suggested a weekly attendance rate of 36 per cent, compared with 65 per cent in 1997 and 78 per cent in 1992.

Such figures, however, only get us so far in historically analysing the state of the Catholic Church in Ireland and its fate in advance of the visit of Pope Francis next weekend. The extraordinarily high level of Mass attendance in previous decades was perhaps deceptive in that such attendance endured at a time when many Catholics were managing the pragmatic compartmentalisation of their faith. One of the commemorative publications to mark the visit of Pope John Paul II in 1979 included this telling assertion: “If ready cheers meant real faith Pope John Paul would have no reason for concern about the young Catholics of Ireland.”

It was a reminder that for all the national giddiness about the 1979 visit it was the very decline in religion’s status in Ireland that had prompted the invitation to the pope. The visit did not reverse developments such as birth rates moving towards the European average, and much of Ireland ultimately embraced the “alien” influences the pope warned against such as materialism and the “permissive society”. Other well-documented complications and difficulties for the church and victims of what historian Daithí O Corráin has described as its “lazy monopoly” in Ireland were added to the mix in the following decades.

The exposure of the church’s dark underbelly, combined with trends in motion since the 1960s – a fall in religious vocations, economic modernisation, wide availability of contraception, increased personal liberties and feminism – meant its dominance was challenged and its credibility on many issues eroded. Even before the full extent of child abuse and institutional scandals became apparent, there was reference in sociological literature to a “new” type of Irish Catholic who adopted a liberal attitude to sexual matters and questioned the right of the church to be arbiter on issues of personal morality.

But the advance of secularism can also be exaggerated. Assertions of a post-Catholic pluralist Republic are wide of the mark. It is certainly notable that there was a fourfold increase in those describing themselves as having “no religion” between 1991 and 2011 and that, in the 2016 census, people indicating “no religion” accounted for 9.8 per cent of the population. But 78 per cent of the population of the Republic identified themselves as Catholic in 2016 and the practice of Catholicism remains strong by international standards.

Journalist and playwright Colin Murphy recently suggested “the victory of the liberal left in the Irish culture war has been extraordinary and near-total” if measured by such developments as the decriminalisation of male homosexual acts in 1993, the wide availability of contraception, the legalisation of divorce in 1995, marriage equality in 2015 and the repeal of the Eighth Amendment this year.

But many younger people, while not generally Mass goers, marry in churches and baptise their children, and Murphy suggests, “Catholicism remains a defining feature of this country and culture.” Over 90 per cent of Irish primary schools are under the patronage of the Catholic Church and, as a result, many non-Catholic students are being educated in Catholic schools, with little sense of any end to such dominance in sight.

Many non-practising Catholics are referred to as “cultural Catholics” who inherited the faith but are not interested in it except when it serves their interests. The phrase “cultural Catholic” can thus legitimately be seen as a euphemism to describe many who are simply lazy hypocrites who treat Catholic sacraments as festive conveniences and do not engage in any meaningful debate about faith.

The combination of all these versions of Irish Catholicism means those who embrace the presence of Pope Francis can hardly be classed as “strangers in a strange land”. But they are devotees in the midst of ongoing failures to confront the consequences of decades of abuse and misuse of power, here and elsewhere.

I can still hear Cardinal Cahal Daly’s reaction in 1994 to revelations of child abuse by clergy. “There has not been for many years any cover-up and there will not be any cover-up. We’re humbled by the whole experience.” Almost a quarter of a century later, these words remain what they were then: a grotesque deceit. It is imperative that Pope Francis is loudly reminded of that and his own failures to adequately confront it.

1 Seán O’Brien: Anger over my parents’ break-up has never left me
2 Retailers accused of ‘stealing business’ from rivals by flouting restrictions
3 Two hundred Irish retailers for all your online Christmas shopping
4 Why Waterford is ‘the best Covid county in Ireland’
5 Sinn Féin’s stand on Covid is facing increasing questions from political rivals
Real news has value SUBSCRIBE