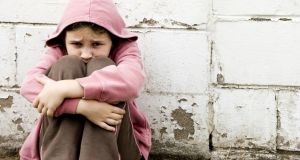 ‘More than one-third of Irish children live in households experiencing two or more types of material deprivation such as being unable to afford to heat their homes.’ Photograph: File image/Getty Images

The fact that the number of homeless children in the capital exceeds 2,000 for the first time since current records began is further evidence Ireland is a deeply unequal country. Economic inequality is worsening despite the recovery and, for those experiencing inequality, particularly children, Ireland is a very harsh place.

Economic inequality has become a defining global issue since the 2008 crash. The rise in wealth of the super-rich while the majority suffer austerity, debt and stagnant wages has led to intense political and economic attention. Here in Ireland we have experienced similar trends.

The minimum wage, for example, remains 20 per cent lower than the living wage of €11.50 per hour. Ireland’s progressive income tax and social protection spending does reduce this “gross” income inequality (the highest in the EU) and results in a net income inequality at the EU average. However, Ireland’s net income inequality has also risen in recent years, and an accurate assessment of economic inequality requires inclusion of other measures (such as wealth, poverty, public services, taxation, cost of living) which Tasc provides in our recent report Cherishing All Equally 2016.

Economic inequality has a profoundly damaging impact on children’s educational development and wellbeing. At age nine months, the level of household income a child is born into has no correlation with their inherent cognitive potential.

However, by just three years of age, children in higher-income families perform better with a 1 per cent increase in household income predicted to lead to a 5.1 per cent increase in educational test scores. By nine, there is a strong negative correlation between children’s self-image and their social class background, as children from more disadvantaged backgrounds are more anxious, less happy and report poorer behaviour.

By 13, children have internalised their inequality by reducing their expectations. Only 36 per cent of children aged 13 from the bottom-income decile expect to achieve a third-level education in contrast to 65 per cent from the top-income decile. Children growing up in disadvantaged areas face multiple inequalities while inequalities in relation to health and housing are also significant.

Women in Ireland are also disproportionately affected by inequality, with a concentration of women in low-paid, part-time work and unpaid care work. Gender inequalities result in women being underrepresented in more senior positions. Another important factor is the inadequate provision of quality and affordable public services and infrastructure in housing, childcare, transport, healthcare and education. Ireland’s government expenditure as a percentage of gross domestic product is now the joint-lowest (with Lithuania) in the EU.

Ireland’s high level of economic inequality results from structural issues shaped by the type of economic policies pursued in recent decades. We have followed a variety of capitalism that is deregulated, neoliberal and free-market in orientation. In contrast, the Nordic countries have pursued a more regulated social economy model resulting in greater equality and lower poverty.

Policymakers should remember the message from the public in the general election: investment in quality public services (health, housing) should be prioritised before tax cuts. This centenary year should give the economic equality dimension of the 1916 Proclamation, which declared “equal rights and equal opportunities” to all citizens, the required political and policy attention it merits.

Dr Rory Hearne is a senior policy analyst with Tasc and lead author of Cherishing All Equally 2016. tasc.ie/publications/ cherishing-all-equally-2016/